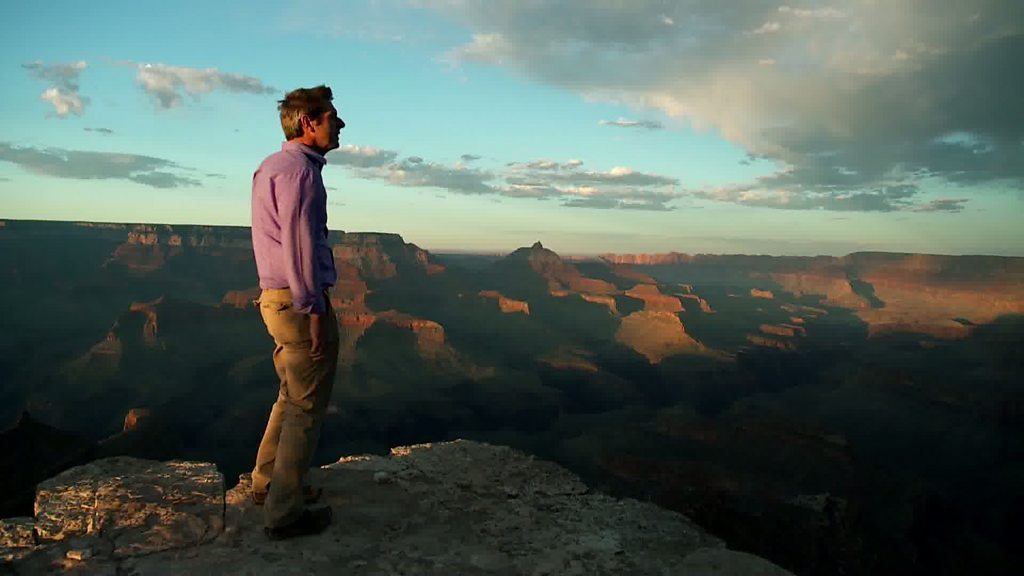 Rise of the Continents episode 3 - The Americas

Rise of the Continents episode 3 – The Americas: Geologist Iain Stewart reconstructs how North and South America were created. Professor Iain Stewart uncovers clues hidden within the New York skyline, the anatomy of American alligators and inside Bolivian silver mines, to reconstruct how North and South America were created. We call these two continents the New World, and in a geological sense they are indeed new worlds, torn from the heart of an ancient supercontinent – the Old World of Pangaea.

Iain starts in New York, where the layout of the city’s skyscrapers provide a link to a long-lost world. Deep within their foundations is evidence that 300 million years ago New York was at the heart of a huge mountain range – part of the vast supercontinent called Pangaea.

Trekking into the Grand Canyon, Iain uncovers a layer of sandstone from Pangaean times that shows there was a vast desert either side of the mountains. Footprints in the rocks of the Grand Canyon reveal that there was only one type of animal that could thrive here – a newly evolved group called the reptiles. Iain meets the closest living relative of those early reptiles – the alligator.

Two hundred million years ago, Pangea underwent a transformation. North and South America were carved from Pangaea, and pushed westwards as separate island continents. To see how this westward movement shaped South America’s often bloody human history, Iain travels to Potosi in Bolivia. Cerro Rico is one of the most dangerous mines in human history. Iain goes to the heart of this extinct volcano to reveal the process that has shaped South America – subduction.

Rise of the Continents episode 3 – The Americas

Subduction has also created the longest continual mountain range in the world – the Andes. At its heart lies the stunning ethereal landscape of the Salar de Uyuni, a vast salt flat where a lake has been uplifted thousands of metres above sea level. The lithium found here may be a new source of mineral wealth for Bolivia, for use in mobile phones.

The last chapter in the story of the Americas is told through that most typically Andean animal, the llama. But like much of South America’s wildlife it originated in North America, and only came south when the two island continents of North and South America joined three million years ago.

Since that momentous joining the story of the Americas has been a shared one. Together they continue their westward drift away from the Old World. However, on a cultural and economic level you could argue that the opposite is the case. In our new global economy the Americas are at the very heart of our connected world.

Pangaea or Pangea was a supercontinent that existed during the late Paleozoic and early Mesozoic eras. It assembled from earlier continental units approximately 335 million years ago, and began to break apart about 175 million years ago. In contrast to the present Earth and its distribution of continental mass, Pangaea was centred on the Equator and surrounded by the superocean Panthalassa. Pangaea is the most recent supercontinent to have existed and the first to be reconstructed by geologists.

The geography of the continents bordering the Atlantic Ocean was the first evidence suggesting the existence of Pangaea. The seemingly close fit of the coastlines of North and South America with Europe and Africa was remarked on almost as soon as these coasts were charted. The first to suggest that these continents were once joined and later separated may have been Abraham Ortelius in 1596. Careful reconstructions showed that the mismatch at the 500 fathoms (3,000 feet; 910 meters) contour was less than 130 km (81 mi), and it was argued that this was much too good to be attributed to chance.

Additional evidence for Pangaea is found in the geology of adjacent continents, including matching geological trends between the eastern coast of South America and the western coast of Africa. The polar ice cap of the Carboniferous Period covered the southern end of Pangaea. Glacial deposits, specifically till, of the same age and structure are found on many separate continents that would have been together in the continent of Pangaea.

Fossil evidence for Pangaea includes the presence of similar and identical species on continents that are now great distances apart. For example, fossils of the therapsid Lystrosaurus have been found in South Africa, India and Antarctica, alongside members of the Glossopteris flora, whose distribution would have ranged from the polar circle to the equator if the continents had been in their present position; similarly, the freshwater reptile Mesosaurus has been found in only localized regions of the coasts of Brazil and West Africa.

Title
Rise of the Continents episode 3 - The Americas
Description

Rise of the Continents episode 3 - The Americas: Geologist Iain Stewart reconstructs how North and South America were created.

The Farthest: Voyager in Space