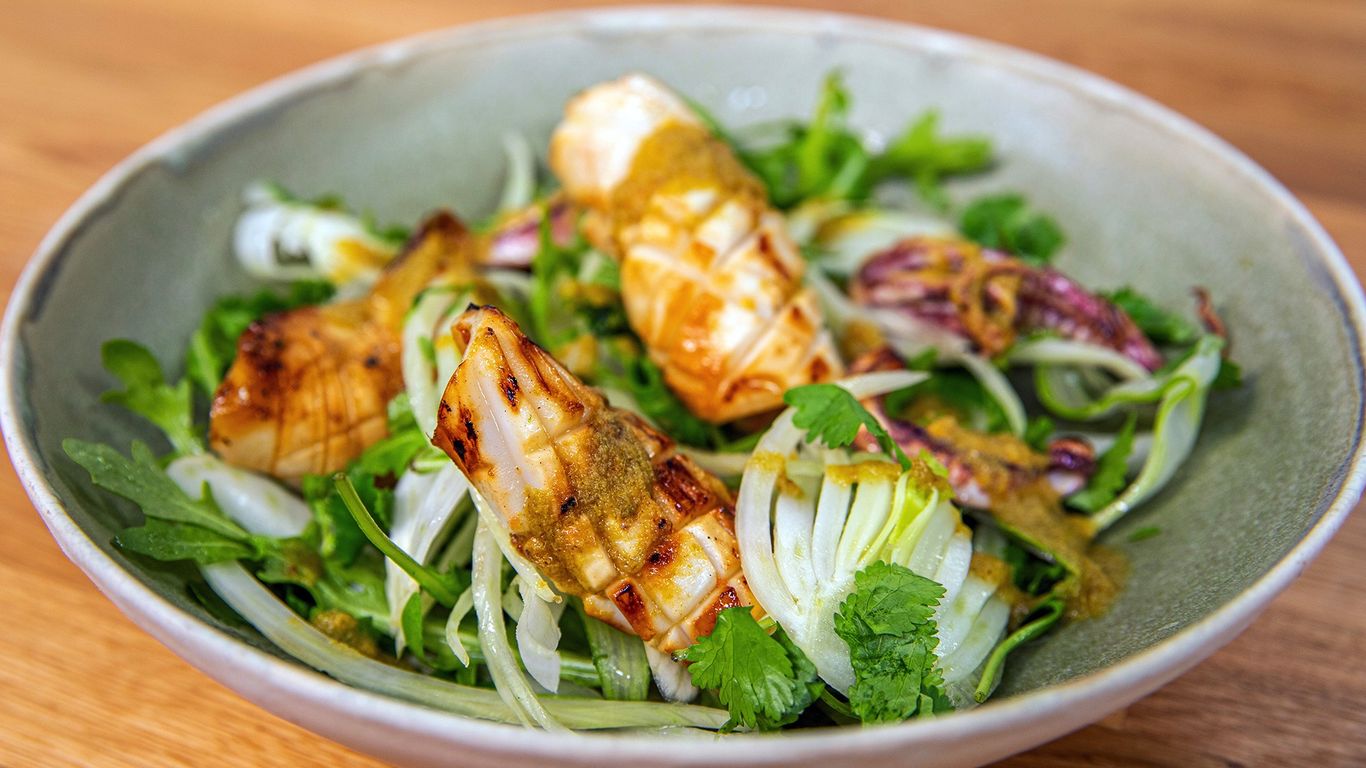 Simply Raymond Blanc episode 7: Raymond Blanc shares his love of travel and embracing the influence of other cultures into his cuisine. He cooks a sensationally fresh flash fired squid.

The chef transforms classic dishes with herbs and spices from his garden, including moules three ways and a slow-roasted harissa lamb shoulder with chickpeas.

It’s been a while since the Michelin-starred chef patron of Le Manoir has been on TV but he returns this morning to share what he describes as delicious, unfussy recipes made from easily available ingredients and using basic equipment. So, no cheffy flourishes, sous vide baths or aerators. Although he does have the advantage of being able to utilise Le Manoir’s fabulous kitchen garden instead of relying on the local supermarket.

The chef shares a collection of simple, rustic recipes that can be put together easily, as well as revealing the workings of the world-famous Le Manoir aux Quat’Saisons where he is Chef Patron and which provides much of the fruit and vegetables that go into his dishes. In the first episode, he is joined by Angela Hartnett, who will be cooking cep tagliatelle. Other recipes include meringue with blackcurrant coulis and a heritage salad with beetroot straight from Raymond’s gardens.

For the fennel and rocket salad

Place the sliced fennel and rocket leaves into separate large bowls of iced water for 30 minutes to allow them to crisp up. Drain in a salad spinner and place on a tray in the fridge, covered with a damp cloth until you are ready to dress the salad and serve.

To prepare the squid

Cut open the squid pouches along the body line and score on the inside, then cut each one into 3 pieces. In a large bowl, mix together the lime juice, ginger, palm sugar, chilli, olive oil and salt. Add the prepared squid to the marinade, toss together well and leave to marinate for 30 minutes.

To prepare the dressing

In a small bowl, mix together the Thai green paste, palm sugar, water and coriander. Place the fennel and rocket salad into a large bowl and dress the salad with 25g or one large tablespoon of the Thai dressing. Reserve the rest to dress the squid after you have grilled it.

To grill the squid

Preheat the griddle until very hot then add the squid and cook for 15–30 seconds on each side. Immediately remove from the griddle to a warm plate. Toss the squid in the thai dressing, taste and adjust the seasoning if necessary.

Pile the rocket salad in the middle of each plate and top with the grilled squid. Drizzle any remaining dressing over and around the plate.

Simply Raymond Blanc episode 7: Raymond Blanc shares his love of travel and embracing the influence of other cultures into his cuisine.