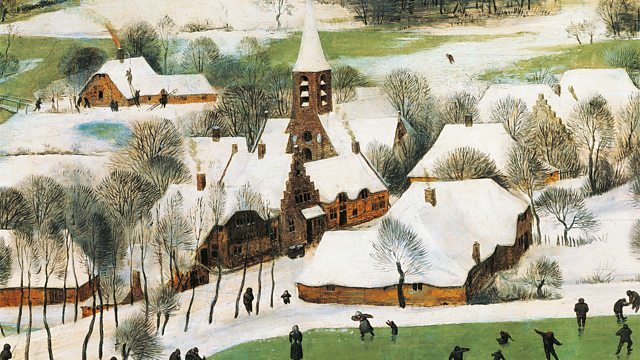 Tales of Winter - The Art of Snow and Ice

Tales of Winter – The Art of Snow and Ice: Winter was not always beautiful. Until Pieter Bruegel painted Hunters in the Snow, the long bitter months had never been transformed into a thing of beauty. This documentary charts how mankind’s ever changing struggle with winter has been reflected in western art throughout the ages, resulting in images that are now amongst the greatest paintings of all time.

With contributions from Grayson Perry, Will Self, Don McCullin and many others, the film takes an eclectic group of people from all walks of life out into the cold to reflect on the paintings that have come to define the art of snow and ice.

Pieter Bruegel was the most significant artist of Dutch and Flemish Renaissance painting, a painter and printmaker, known for his landscapes and peasant scenes (so-called genre painting); he was a pioneer in making both types of subject the focus in large paintings.

He was a formative influence on Dutch Golden Age painting and later painting in general in his innovative choices of subject matter, as one of the first generation of artists to grow up when religious subjects had ceased to be the natural subject matter of painting. He also painted no portraits, the other mainstay of Netherlandish art. After his training and travels to Italy, he returned in 1555 to settle in Antwerp, where he worked mainly as a prolific designer of prints for the leading publisher of the day. Only towards the end of the decade did he switch to make painting his main medium, and all his famous paintings come from the following period of little more than a decade before his early death, when he was probably in his early forties, and at the height of his powers.

As well as looking forwards, his art reinvigorates medieval subjects such as marginal drolleries of ordinary life in illuminated manuscripts, and the calendar scenes of agricultural labours set in landscape backgrounds, and puts these on a much larger scale than before, and in the expensive medium of oil painting. He does the same with the fantastic and anarchic world developed in Renaissance prints and book illustrations.

He is sometimes referred to as “Peasant Bruegel”, to distinguish him from the many later painters in his family, including his son Pieter Brueghel the Younger (1564–1638). From 1559, he dropped the ‘h’ from his name and signed his paintings as Bruegel; his relatives continued to use “Brueghel” or “Breughel”.

Title
Tales of Winter - The Art of Snow and Ice
Description

Tales of Winter - The Art of Snow and Ice: Winter was not always beautiful. Until Pieter Bruegel painted Hunters in the Snow