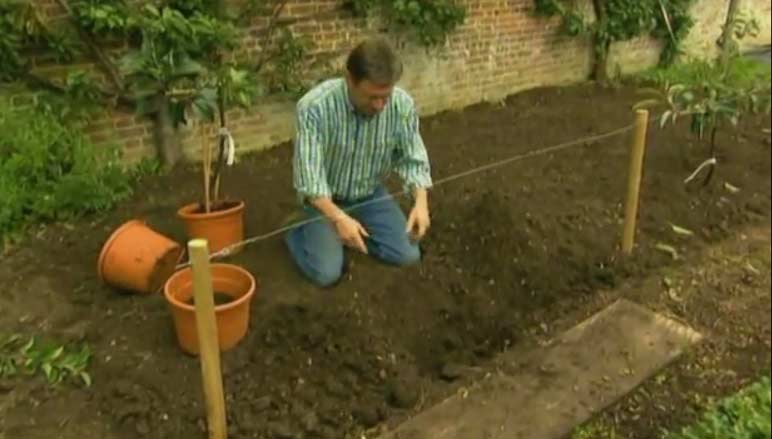 The A to Z of TV Gardening - Letter T

The A to Z of TV Gardening – Letter T: Carol Kirkwood takes an alphabetical journey through the world of gardening, getting inspiration and advice from some of the BBC’s most popular garden presenters and programmes.

In this episode, she is exploring subjects that all begin with the letter T: Trees, Topiary garden, Tomatoes, Tulip

The A to Z of TV Gardening – Letter T

Topiary is the horticultural practice of training perennial plants by clipping the foliage and twigs of trees, shrubs and sub shrubs to develop and maintain clearly defined shapes, whether geometric or fanciful. The term also refers to plants which have been shaped in this way. As an art form it is a type of living sculpture. The word derives from the Latin word for an ornamental landscape gardener, topiarius, a creator of topia or “places”, a Greek word that Romans also applied to fictive indoor landscapes executed in fresco.

The plants used in topiary are evergreen, mostly woody, have small leaves or needles, produce dense foliage, and have compact and/or columnar (e.g., fastigiate) growth habits. Common species chosen for topiary include cultivars of European box (Buxus sempervirens), arborvitae (Thuja species), bay laurel (Laurus nobilis), holly (Ilex species), myrtle (Eugenia or Myrtus species), yew (Taxus species), and privet (Ligustrum species). Shaped wire cages are sometimes employed in modern topiary to guide untutored shears, but traditional topiary depends on patience and a steady hand; small-leaved ivy can be used to cover a cage and give the look of topiary in a few months. The hedge is a simple form of topiary used to create boundaries, walls or screens.

The tomato is the edible, often red, berry of the plant Solanum lycopersicum, commonly known as a tomato plant. The species originated in western South America and Central America. The Nahuatl (Aztec language) word tomatl gave rise to the Spanish word tomate, from which the English word tomato derived. Its domestication and use as a cultivated food may have originated with the indigenous peoples of Mexico. The Aztecs used tomatoes in their cooking at the time of the Spanish conquest of the Aztec Empire, and after the Spanish encountered the tomato for the first time after their contact with the Aztecs, they brought the plant to Europe. From there, the tomato was introduced to other parts of the European-colonized world during the 16th century.

Tulips (Tulipa) form a genus of spring-blooming perennial herbaceous bulbiferous geophytes (having bulbs as storage organs). The flowers are usually large, showy and brightly colored, generally red, pink, yellow, or white (usually in warm colors). They often have a different colored blotch at the base of the tepals (petals and sepals, collectively), internally. Because of a degree of variability within the populations, and a long history of cultivation, classification has been complex and controversial.

The tulip is a member of the lily family, Liliaceae, along with 14 other genera, where it is most closely related to Amana, Erythronium and Gagea in the tribe Lilieae. There are about 75 species, and these are divided among four subgenera. The name “tulip” is thought to be derived from a Persian word for turban, which it may have been thought to resemble. Tulips originally were found in a band stretching from Southern Europe to Central Asia, but since the seventeenth century have become widely naturalised and cultivated (see map). In their natural state they are adapted to steppes and mountainous areas with temperate climates. Flowering in the spring, they become dormant in the summer once the flowers and leaves die back, emerging above ground as a shoot from the underground bulb in early spring.

Title
The A to Z of TV Gardening - Letter T
Description

The A to Z of TV Gardening - Letter T: Carol Kirkwood takes an alphabetical journey through the world of gardening, getting inspiration and advice