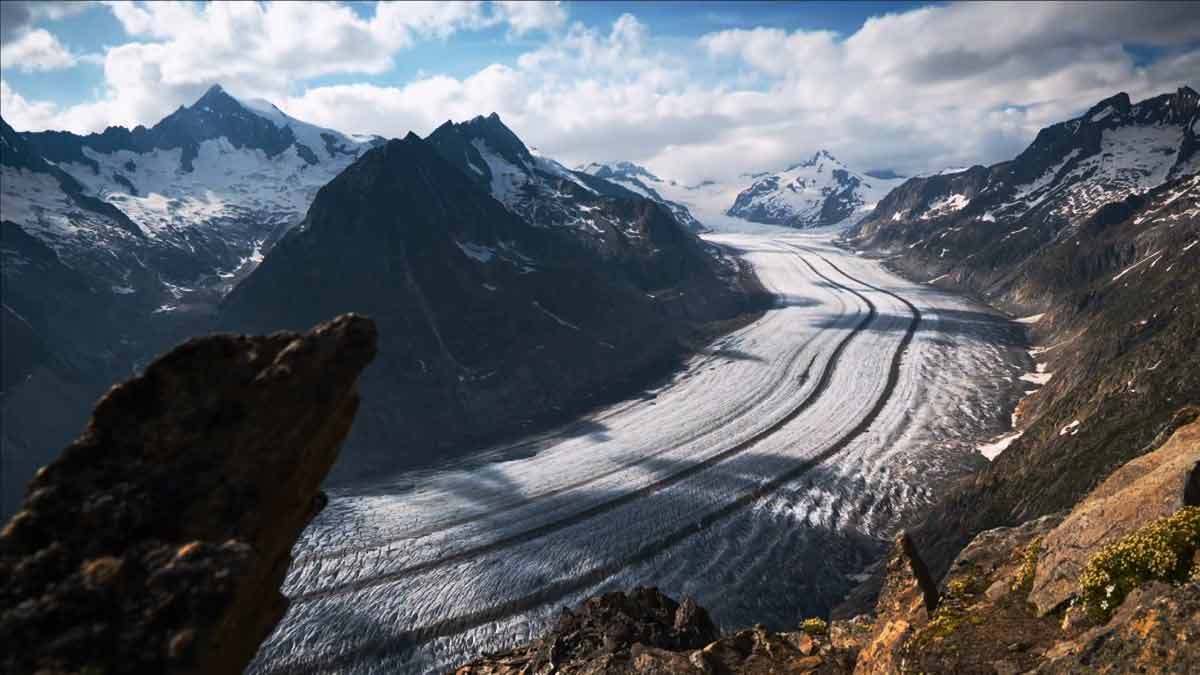 The Alps episode 1: Enjoy the Alps in spring and summertime as newborn animals grow up to face the coming brutal winter.

The Alps are the highest and most extensive mountain range system that lies entirely in Europe, stretching approximately 1,200 km (750 mi) across eight Alpine countries (from west to east): France, Switzerland, Monaco, Italy, Liechtenstein, Austria, Germany, and Slovenia. The Alpine arch generally extends from Nice on the western Mediterranean to Trieste on the Adriatic and Vienna at the beginning of the Pannonian basin.

The mountains were formed over tens of millions of years as the African and Eurasian tectonic plates collided. Extreme shortening caused by the event resulted in marine sedimentary rocks rising by thrusting and folding into high mountain peaks such as Mont Blanc and the Matterhorn. Mont Blanc spans the French–Italian border, and at 4,809 m (15,778 ft) is the highest mountain in the Alps. The Alpine region area contains 128 peaks higher than 4,000 m (13,000 ft).

The altitude and size of the range affects the climate in Europe; in the mountains precipitation levels vary greatly and climatic conditions consist of distinct zones. Wildlife such as ibex live in the higher peaks to elevations of 3,400 m (11,155 ft), and plants such as Edelweiss grow in rocky areas in lower elevations as well as in higher elevations. Evidence of human habitation in the Alps goes back to the Palaeolithic era. A mummified man, determined to be 5,000 years old, was discovered on a glacier at the Austrian–Italian border in 1991.

The Alps are a habitat for 30,000 species of wildlife, ranging from the tiniest snow fleas to brown bears, many of which have made adaptations to the harsh cold conditions and high altitudes to the point that some only survive in specific micro-climates either directly above or below the snow line.

The largest mammal to live in the highest altitudes are the alpine ibex, which have been sighted as high as 3,000 m (9,800 ft). The ibex live in caves and descend to eat the succulent alpine grasses. Classified as antelopes, chamois are smaller than ibex and found throughout the Alps, living above the tree line and are common in the entire alpine range. Areas of the eastern Alps are still home to brown bears. In Switzerland the canton of Bern was named for the bears but the last bear is recorded as having been killed in 1792 above Kleine Scheidegg by three hunters from Grindelwald.

Many rodents such as voles live underground. Marmots live almost exclusively above the tree line as high as 2,700 m (8,900 ft). They hibernate in large groups to provide warmth, and can be found in all areas of the Alps, in large colonies they build beneath the alpine pastures. Golden eagles and bearded vultures are the largest birds to be found in the Alps; they nest high on rocky ledges and can be found at altitudes of 2,400 m (7,900 ft). The most common bird is the alpine chough which can be found scavenging at climber’s huts or at the Jungfraujoch, a high altitude tourist destination.

The Alps episode 1: Enjoy the Alps in spring and summertime as newborn animals grow up to face the coming brutal winter.