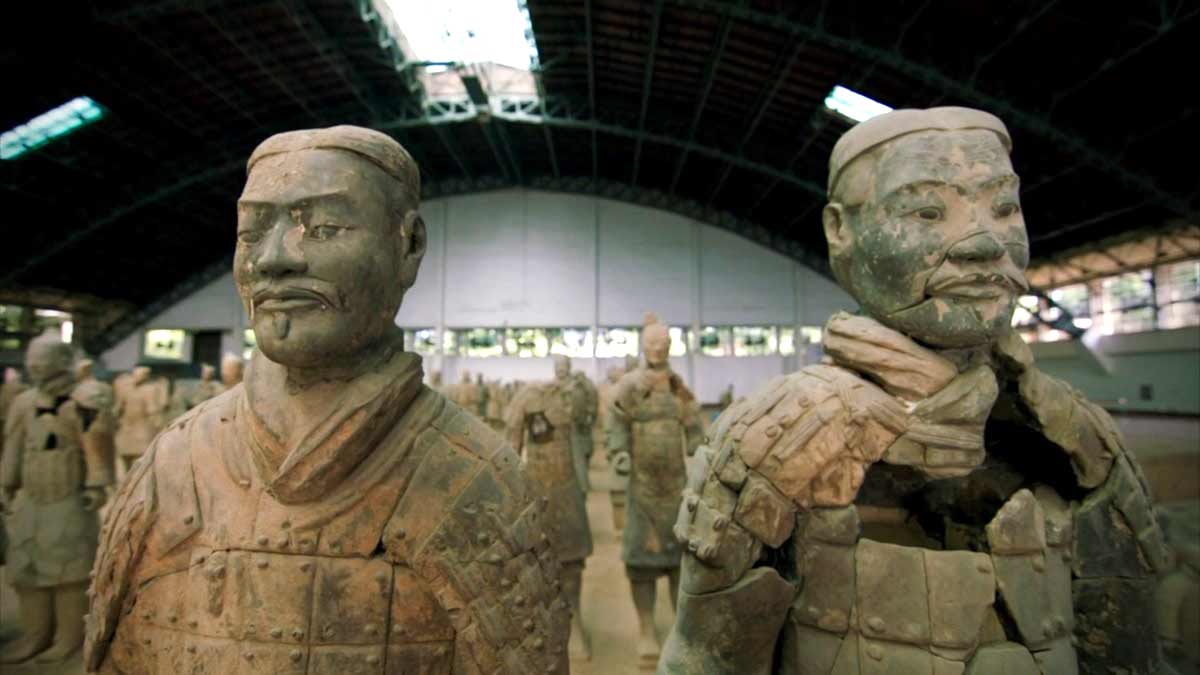 The Greatest Tomb on Earth: Secrets of Ancient China – From the depths of the greatest tomb on earth comes an epic new story that could rewrite history, revealing for the first time the true origin of one of the world’s most powerful nations: China.

In this landmark film, historian Dan Snow, physical anthropologist Professor Alice Roberts and scientist and explorer Dr Albert Lin investigate a series of earth-shattering discoveries at the mighty tomb guarded by the Terracotta Warriors, a site two hundred times bigger than Egypt’s Valley of the Kings and the final resting place of China’s first emperor.

Mobilising the latest technology, delving into some of the oldest texts, enlisting world experts and employing forensic science, together the three reveal an explosive secret from the foundations of the Chinese empire.

The Terracotta Army is a collection of terracotta sculptures depicting the armies of Qin Shi Huang, the first Emperor of China. It is a form of funerary art buried with the emperor in 210–209 BCE with the purpose of protecting the emperor in his afterlife.

The figures, dating from approximately the late third century BCE, were discovered in 1974 by local farmers in Lintong County, outside Xi’an, Shaanxi, China. Figures vary in height according to their roles, with the tallest being the generals. The figures include warriors, chariots and horses. Estimates from 2007 were that the three pits containing the Terracotta Army held more than 8,000 soldiers, 130 chariots with 520 horses, and 150 cavalry horses, the majority of which remained buried in the pits near Qin Shi Huang’s mausoleum. Other terracotta non-military figures were found in other pits, including officials, acrobats, strongmen, and musicians.

The construction of the tomb was described by historian Sima Qian (145–90 BCE) in Records of the Grand Historian, the first of China’s 24 dynastic histories, which was written a century after the mausoleum’s completion. Work on the mausoleum began in 246 BCE soon after Emperor Qin (then aged 13) ascended the throne, and the project eventually involved conscripted 700,000 workers. Geographer Li Daoyuan, writing six centuries after the first emperor’s death, recorded in Shui Jing Zhu that Mount Li was a favoured location due to its auspicious geology, “famed for its jade mines, its northern side was rich in gold, and its southern side rich in beautiful jade; the first emperor, covetous of its fine reputation, therefore chose to be buried there”.