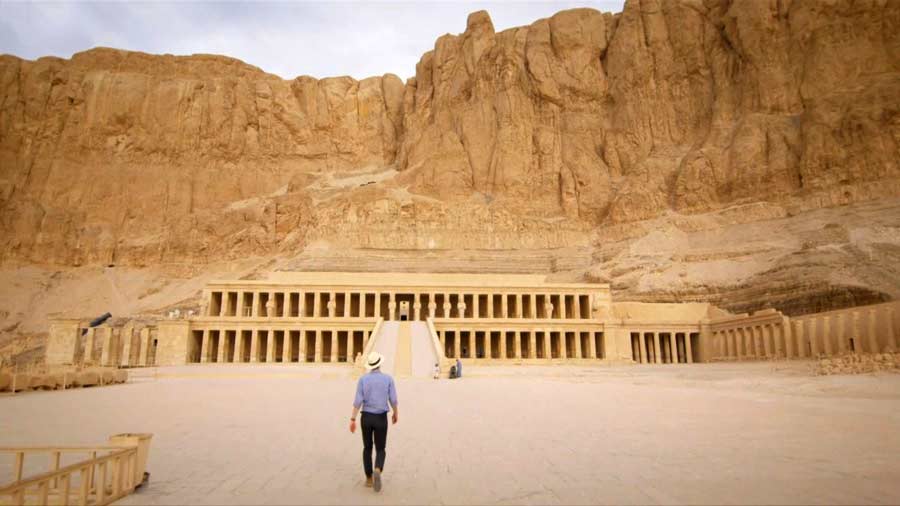 Treasures of Ancient Egypt episode 2: On a journey through Ancient Egyptian art, Alastair Sooke picks treasures from its most opulent and glittering moment.

Starting with troubling psychological portraits of tyrant king Senwosret III and ending with the golden mask of boy king Tutankhamun, Sooke also explores architectural wonders, exquisite tombs and a lost city – site of the greatest artistic revolution in Egypt’s history where a new sinuous style was born under King Akhenaten and Queen Nefertiti. Along the way Egyptologists and artists reveal that the golden veneer conceals a touching humanity.

Neferneferuaten Nefertiti (c. 1370 – c. 1330 BC) was an Egyptian queen and the Great Royal Wife of Akhenaten, an Egyptian Pharaoh. Nefertiti and her husband were known for a religious revolution, in which they worshipped one god only, Aten, or the sun disc. With her husband, she reigned at what was arguably the wealthiest period of Ancient Egyptian history. Some scholars believe that Nefertiti ruled briefly as Neferneferuaten after her husband’s death and before the accession of Tutankhamun, although this identification is a matter of ongoing debate. If Nefertiti did rule as Pharaoh, her reign was marked by the fall of Amarna and relocation of the capital back to the traditional city of Thebes.

Nefertiti had many titles including Hereditary Princess; Great of Praises; Lady of Grace, Sweet of Love; Lady of The Two Lands; Main King’s Wife, his beloved; Great King’s Wife, his beloved, Lady of All Women; and Mistress of Upper and Lower Egypt. While modern Egyptological pronunciation renders her name as Nefertiti, her name was probably contemporaneously pronounced as Nafertyiti.

Akhenaten, known before the fifth year of his reign as Amenhotep IV (sometimes given its Greek form, Amenophis IV, and meaning “Amun Is Satisfied”), was an ancient Egyptian pharaoh of the 18th Dynasty, who ruled for 17 years and died perhaps in 1336 BC or 1334 BC. He is noted for abandoning traditional Egyptian polytheism and introducing worship centered on the Aten (notably instead of Amun, the temples of which he destroyed, the name of whom he rubbed off and the priests of whom he left without resources), which is sometimes described as monolatristic, henotheistic, or even quasi-monotheistic. An early inscription likens the Aten to the sun as compared to stars, and later official language avoids calling the Aten a god, giving the solar deity a status above mere gods.

Khakaure Senusret III (also written as Senwosret III or the hellenised form, Sesostris III) was a pharaoh of Egypt. He ruled from 1878 BC to 1839 BC during a time of great power and prosperity, and was the fifth king of the Twelfth Dynasty of the Middle Kingdom. He was a great pharaoh of the Twelfth Dynasty and is considered to be, perhaps, the most powerful Egyptian ruler of the dynasty. Consequently, he is regarded as one of the sources for the legend about Sesostris. His military campaigns gave rise to an era of peace and economic prosperity that reduced the power of regional rulers and led to a revival in craftwork, trade, and urban development. Senusret III was among the few Egyptian kings who were deified and honored with a cult during their own lifetime.

Treasures of Ancient Egypt episode 2: On a journey through Ancient Egyptian art, Alastair Sooke picks treasures from its most opulent and glittering moment.