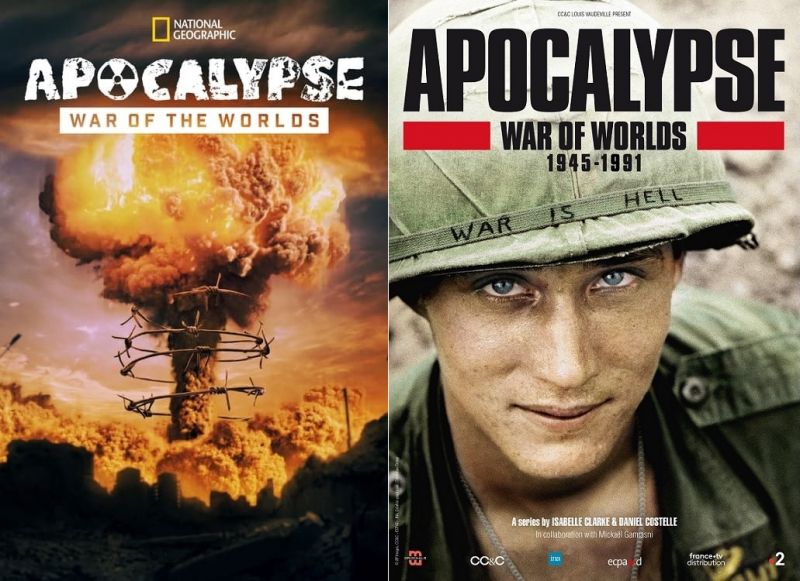 War of Worlds 1950-1952 – The World Trembles: September 1950. On the banks at Incheon, 30 miles from Seoul, General MacArthur is victorious. The landing he planned, to rescue his men stuck in Pusan, was a success. But the war isn’t over. In the North, the Americans will have to face an unexpected enemy. On the other side of the frozen Yalu river, Mao, covert as always, has stationed 300,000 of his men. On Thanksgiving Day, the Chinese and North Koreans attack the US army, whose only choice is to fall back.

Faced with his army’s defeat and Chinese intervention, Truman considers the atomic bomb… Further south, in Indochina, the French are also suffering setbacks. An ambush set by the Vietminh on the road Route Coloniale 4 annihilates them. To relieve the situation, the French government sent as a last resort one of its most famous generals: Jean de Lattre de Tassigny. French win a victory in Vinh Yen , but suffer heavy losses too. The parallel between Korea and Indochina is striking: the same hidden operators, frightened civilians, bomb blasted regions, columns of emaciated prisoners… For De Lattre, it is indeed one and the same war: the war for freedom, against communism. And the real enemy is Stalin, who sends North Koreans weapons and MIG-15 planes, and struts in front of his people with a super bomber capable of carrying his brand new atomic bomb. Will Stalin conquer the world?

Mao Zedong (December 26, 1893 – September 9, 1976), also known as Chairman Mao, was a Chinese communist revolutionary who was the founding father of the People’s Republic of China, which he ruled as the chairman of the Chinese Communist Party from the establishment of the PRC in 1949 until his death in 1976. Ideologically a Marxist–Leninist, his theories, military strategies, and political policies are collectively known as Maoism.

Mao was the son of a prosperous peasant in Shaoshan, Hunan. He supported Chinese nationalism and had an anti-imperialist outlook early in his life, and was particularly influenced by the events of the Xinhai Revolution of 1911 and May Fourth Movement of 1919. He later adopted Marxism–Leninism while working at Peking University as a librarian and became a founding member of the Chinese Communist Party (CCP), leading the Autumn Harvest Uprising in 1927. During the Chinese Civil War between the Kuomintang (KMT) and the CCP, Mao helped to found the Chinese Workers’ and Peasants’ Red Army, led the Jiangxi Soviet’s radical land policies, and ultimately became head of the CCP during the Long March. Although the CCP temporarily allied with the KMT under the Second United Front during the Second Sino-Japanese War (1937–1945), China’s civil war resumed after Japan’s surrender, and Mao’s forces defeated the Nationalist government, which withdrew to Taiwan in 1949.

Douglas MacArthur (26 January 1880 – 5 April 1964) was an American military leader who served as General of the Army for the United States, as well as a Field Marshal to the Philippine Army. He was Chief of Staff of the United States Army during the 1930s, and he played a prominent role in the Pacific theater during World War II. Macarthur received the Medal of Honor for his service in the Philippines campaign. This made him and his father Arthur MacArthur Jr. the first father and son to be awarded the medal. He was one of only five to rise to the rank of General of the Army in the U.S. Army, and the only one conferred the rank of field marshal in the Philippine Army.

Raised in a military family in the American Old West, MacArthur was valedictorian at the West Texas Military Academy where he finished high school, and First Captain at the United States Military Academy at West Point, where he graduated top of the class of 1903. During the 1914 United States occupation of Veracruz, he conducted a reconnaissance mission, for which he was nominated for the Medal of Honor. In 1917, he was promoted from major to colonel and became chief of staff of the 42nd (Rainbow) Division. In the fighting on the Western Front during World War I, he rose to the rank of brigadier general, was again nominated for a Medal of Honor, and was awarded the Distinguished Service Cross twice and the Silver Star seven times.