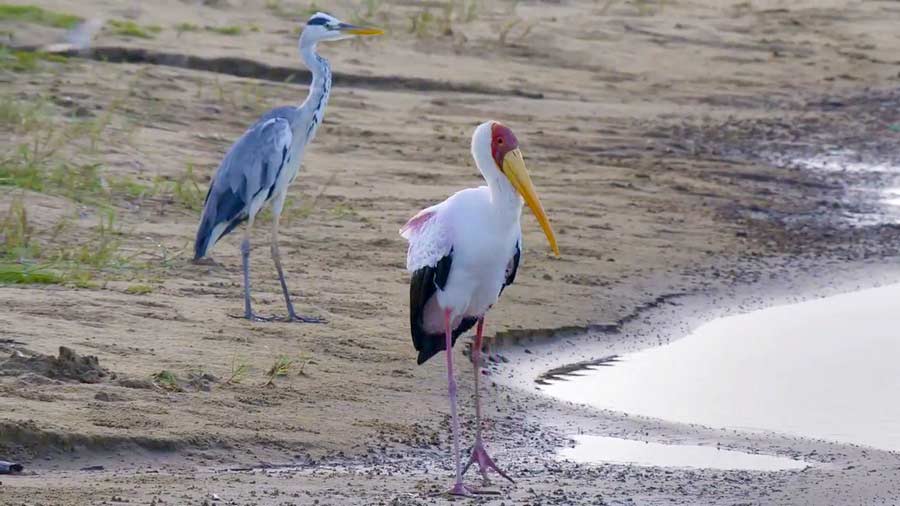 Waterworld Africa episode 8 – Wetland Wonder: Lake St. Lucia, Africa’s largest estuary lake, is under siege. A series of human missteps have left it cut off from the sea, and the water levels are dangerously low.

The wildlife relying on its ecosystem are most affected–from hippos and crocodiles that live on its banks, to exotic birds that migrate from as far as 6,000 miles away. Can they adjust to the new, drier reality imposed on them?

Embark on a safari to a diverse and astonishing wilderness, like no other on Earth. From the mangrove forests of southern Africa to the natural abundance of the Okavango Delta, this series is a powerful testament to the amazing ability water has to spark life where none existed before.

iSimangaliso Wetland Park (previously known as the Greater St. Lucia Wetland Park) is situated on the east coast of KwaZulu-Natal, South Africa, about 275 kilometres north of Durban. It is South Africa’s third-largest protected area, spanning 280 km of coastline, from the Mozambican border in the north to Mapelane south of the Lake St. Lucia estuary, and made up of around 3,280 km2 of natural ecosystems, managed by the iSimangaliso Authority.

The Swiss missionary, Reverend Henri-Alexandre Junod (known as HA Junod), conducted a scientific and ethnographic study of the Tsonga people during the early 1890s and produced a detailed map, showing the occupation of the bay by the Tsonga Tembe people. The Swiss Missionary, Rev Junod, illustrated in his detailed map that the area was known as Tembeland and that the Tembe capital city was located in the St Lucia bay. Rev Junod’s map showed that by 1906, the Tsonga people occupied the land from St Lucia up until Valdezia in the Spelenkon district of the Transvaal province, known today as Limpopo Province.

Waterworld Africa episode 8 - Wetland Wonder: The wildlife relying on its ecosystem are most affected, from hippos and crocodiles that live on its banks

The Magic of Mushrooms