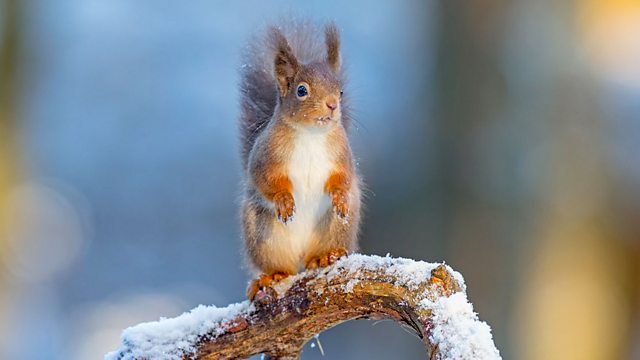 Winterwatch 2021 episode 2: In this episode, Winterwatch concentrates on the superpowers that some of our wildlife has developed in order to survive this harshest of seasons. Chris Packham will be in the New Forest to catch up on the action from the live cameras there and on the River Ness in Scotland.

Iolo Williams is looking at a feral flock of barnacle geese that have descended on RSPB Ynis Hir. Gillian Burke is at RPSB Old Moor in South Yorkshire, where grazing Konik ponies help manage the landscape. Michaela Strachan is looking at the short-eared owls who spend the season on the Isle of May. We also delve below the surface of Loch Carron to see the amazing brittle stars who thrive there in winter, and through the use of new camera technology, we explore the science behind how owls hunt at night.

Brittle stars, serpent stars, or ophiuroids are echinoderms in the class Ophiuroidea closely related to starfish. They crawl across the sea floor using their flexible arms for locomotion. The ophiuroids generally have five long, slender, whip-like arms which may reach up to 60 cm (24 in) in length on the largest specimens. From New Latin ophiurus (“brittle star”), from Ancient Greek ὄφις (óphis, “serpent”) + οὐρά (ourá, “tail”) (referring to the serpent-like arms of the brittle star).

Of all echinoderms, the Ophiuroidea may have the strongest tendency toward five-segment radial (pentaradial) symmetry. The body outline is similar to that of starfish, in that ophiuroids have five arms joined to a central body disk. However, in ophiuroids, the central body disk is sharply marked off from the arms.

The disk contains all of the viscera. That is, the internal organs of digestion and reproduction never enter the arms, as they do in the Asteroidea. The underside of the disk contains the mouth, which has five toothed jaws formed from skeletal plates. The madreporite is usually located within one of the jaw plates, and not on the upper side of the animal as it is in starfish.

The ophiuroid coelom is strongly reduced, particularly in comparison to other echinoderms.

Loch Carron (Scottish Gaelic: “Loch Carrann”) is a sea loch on the west coast of Ross and Cromarty in the Scottish Highlands, which separates the Lochalsh peninsula from the Applecross peninsula, and from the Stomeferry headland east of Loch Kishorn. It is the point at which the River Carron enters the North Atlantic Ocean.

According to the marine charts, the tidal currents reach 3 knots (5.6 km/h; 3.5 mph) in the narrows, although not much water disturbance is visible in the flow. At the narrows, the depth of water is less than 20 metres, but in the basins on either side, it extends to a depth of more than 100 metres. Beneath the cliffs at Strome Castle is a colony of flame shells; with a population of over 250 million the loch is the world’s largest flame shell bed, and was designated as a Nature Conservation Marine Protected Area (NCMPA) in 2017, with the protection being made permanent in 2018. The new MPA of 23 km2 took effect on 19 May 2019. Within the MPA the use of fishing gear that may damage the seabed is prohibited, although rod and line fishing and creeling is permitted.

The Isle of May is located in the north of the outer Firth of Forth, approximately 8 km (5.0 mi) off the coast of mainland Scotland. It is about 1.5 kilometres (0.9 miles) long and 0.5 kilometres (0.3 miles) wide. The island is owned and managed by NatureScot as a national nature reserve. There are now no permanent residents, but the island was the site of a St Adrian’s Priory during the Middle Ages.

Most visitors to the island are daytrippers taking the ferry from Anstruther in Fife, although up to six visitors can stay at the bird observatory, usually for a week at a time. The only way to get there is by ferry; the journey takes 45 minutes from the small harbours of Anstruther and Crail, and also from North Berwick. As of 2015, around 11,000 people visited the island each year.

The island is closed to visitors from 1 October until Easter to prevent disturbance to the large number of seal pups. The Scottish Seabird Centre at North Berwick has two live cameras on the island, which can be remotely controlled by visitors, to allow close viewing of the seabird cities, including puffins, guillemots, razorbills, shags, cormorants and terns and the fluffy grey seal pups in winter, without disturbance. The Scottish Seabird Centre also runs boat trips to the Isle of May. As well as its natural heritage, the Isle of May also has a rich cultural heritage, including St Adrian’s Chapel, which is a Scheduled Ancient Monument. Furthermore, the Isle of May Lighthouse; Keepers’ Houses; North and South Horns; the Low and Light Cottages; the Coal Store and Stable Block; and the former Lighthouse Beacon have all been included in the list of Buildings of Special Architectural or Historic Interest.

Winterwatch 2021 episode 2: In this episode, Winterwatch concentrates on the superpowers that some of our wildlife has developed