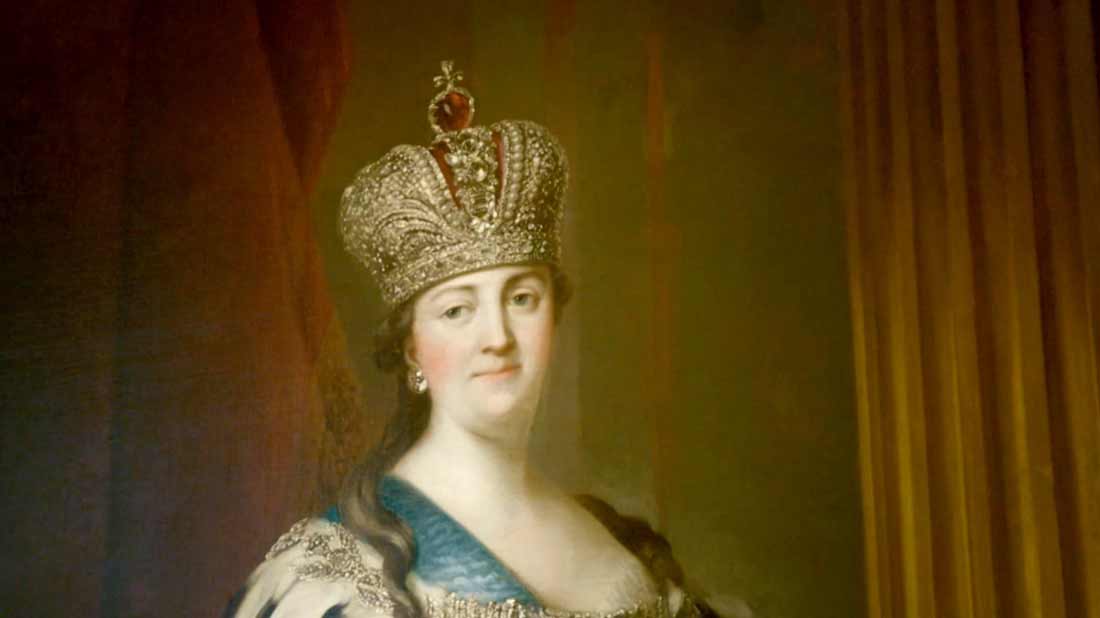 Empire of the Tsars - Romanov Russia episode 2 - Age of Extremes

Empire of the Tsars – Romanov Russia episode 2 – Age of Extremes: This episode she examines the extraordinary reign of Catherine the Great, and the traumatic conflict with Napoleonic France that provides the setting for the novel War and Peace.

Lucy Worsley continues her journey through Russia in the footsteps of the Romanovs, the most powerful royal dynasty in modern European history. Lucy begins in the 18th century, when the great palaces of the Romanovs were built. But in Romanov Russia, blood was always intermingled with the gold – these splendid interiors were the backdrop to affairs, coups and murder.

At the magnificent palace of Peterhof near St Petersburg, Lucy charts the meteoric rise of Catherine the Great, who seized the Russian throne from her husband Peter III in 1762 and became the most powerful woman in the world. Catherine was a woman of huge passions – for art, for her adopted country (she was German by birth) and for her many lovers.

Empire of the Tsars – Romanov Russia episode 2 – Age of Extremes

Lucy visits the Hermitage Museum in St Petersburg, once the home of Catherine’s vast art collection. Here she explores how, once Catherine had taken the throne, she compensated for her foreign origins by taking careful control of her image, using her portraits and clothes to create a brand that looked authentically Russian yet also modern and sophisticated. Lucy tells how Catherine expanded her empire through military victories overseas, while at home she encouraged education and introduced smallpox inoculation to Russia. But Catherine struggled to introduce deeper reforms, and the institution of serfdom remained largely unchanged. Lucy explains how this injustice fuelled a violent rebellion.

Nevertheless, Catherine left Russia more powerful on the world stage than ever. But all she had achieved looked set to be undone when Napoleon invaded Russia in 1812. Lucy relives the pivotal battle of Borodino, when the Russian army finally confronted the French forces; the traumatic destruction of Moscow; and, under Catherine’s grandson Alexander, the eventual victory over the French that provided the Romanov dynasty with its most glorious hour.

The House of Romanov was the reigning imperial house of Russia from 1613 to 1917. The Romanovs achieved prominence as boyars of the Grand Duchy of Moscow and later of the Tsardom of Russia under the reigning Rurik dynasty, which became extinct upon the death of Tsar Feodor I in 1598. The Time of Troubles, caused by the resulting succession crisis, saw several pretenders and imposters (False Dmitris) fight for the crown during the Polish–Muscovite War of 1605-1618. On 21 February 1613, a Zemsky Sobor elected Michael Romanov as Tsar of Russia, establishing the Romanovs as Russia’s second reigning dynasty. Michael’s grandson Peter I, who established the Russian Empire in 1721, transformed the country into a great power through a series of wars and reforms.

The direct male line of the Romanovs ended when Empress Elizabeth of Russia died in 1762, thus the House of Holstein-Gottorp (a cadet branch of the German House of Oldenburg that reigned in Denmark) ascended to the throne in the person of Peter III. Officially known as members of the House of Romanov, descendants after Elizabeth are sometimes referred to as “Holstein-Gottorp-Romanov”. The abdication of Emperor Nicholas II on 15 March 1917 as a result of the February Revolution ended 304 years of Romanov rule and led to the establishing of the Russian Republic under the Russian Provisional Government in the lead-up to the Russian Civil War of 1917-1922. In 1918 Bolshevik officials executed the ex-Emperor and his family. Of the House of Romanov’s 65 members, 47 survivors went into exile abroad.

Russia is a transcontinental country spanning Eastern Europe and Northern Asia. It extends from the Baltic Sea in the west to the Pacific Ocean in the east, and from the Arctic Ocean in the north to the Black and Caspian seas in the south. Russia covers over 17,125,191 square kilometres (6,612,073 sq mi), stretching more than one-eighth of the Earth’s inhabited land area, with eleven time zones, and borders with 16 sovereign nations. Moscow is the country’s capital and largest city; and Saint Petersburg is the second-largest city.

Russia is the largest country in the world, the ninth-most populous country, as well as the most populous country in Europe. The country is one of the world’s most sparsely populated and urbanised. About half of the country’s total area is forested, concentrating around four-fifths of its total population of over 146.8 million on its smaller and dense western portion, as opposed to its larger and sparse eastern portion. Russia is administratively divided into 85 federal subjects. The Moscow Metropolitan Area is the largest metropolitan area in Europe, and among the largest in the world, with more than 20 million residents.