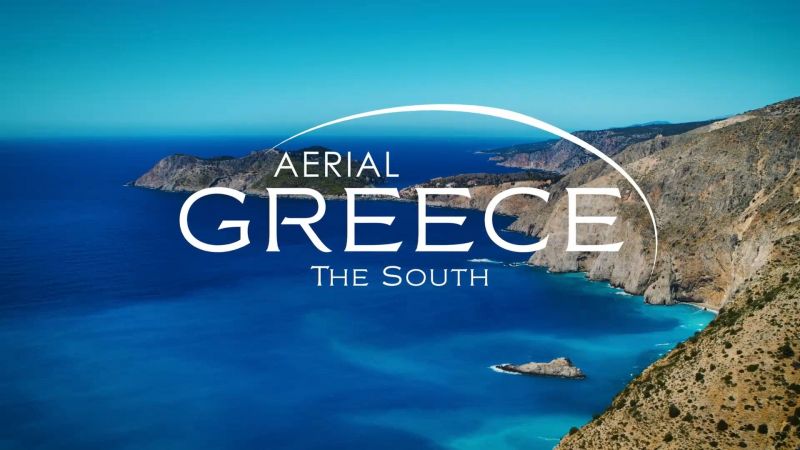 Aerial Greece episode 2 – The South: The story of Western civilization began in Greece, and it was in the South where the first chapter of that story was written. This soaring tour explores lands of ancient warriors, tumultuous battles, and diverse cultures, from the Peloponnese, home of the first Olympic Games, to Athens, where art and politics intertwine, to Cephalonia, an idyllic island with a dark past.

In southern Greece, the glories of the past are mirrored in the wonders of the present, and we capture it all from spectacular heights.

The Peloponnese is a peninsula and geographic region in southern Greece. It is connected to the central part of the country by the Isthmus of Corinth land bridge which separates the Gulf of Corinth from the Saronic Gulf. During the late Middle Ages and the Ottoman era, the peninsula was known as the Morea (Byzantine Greek: Μωρέας), a name still in colloquial use in its demotic form (Greek: Μωριάς).

The peninsula is divided among three administrative regions: most belongs to the Peloponnese region, with smaller parts belonging to the West Greece and Attica regions.

The Peloponnese is a peninsula located at the southern tip of the mainland, 21,549.6 square kilometres (8,320.3 sq mi) in area, and constitutes the southernmost part of mainland Greece. It is connected to the mainland by the Isthmus of Corinth, where the Corinth Canal was constructed in 1893. However, it is also connected to the mainland by several bridges across the canal, including two submersible bridges at the north and the south end. Near the northern tip of the peninsula, there is another bridge, the Rio–Antirrio bridge (completed 2004). Indeed, the Peloponnese is rarely, if ever, referred to as an island.

The peninsula has a mountainous interior and deeply indented coasts. The Peloponnese possesses four south-pointing peninsulas, the Messenian, the Mani, the Cape Malea (also known as Epidaurus Limera), and the Argolid in the far northeast of the Peloponnese. Mount Taygetus in the south is the highest mountain in the Peloponnese, at 2,407 metres (7,897 ft). Οther important mountains include Cyllene in the northeast (2,376 metres (7,795 ft)), Aroania in the north (2,355 metres (7,726 ft)), Erymanthos (2,224 metres (7,297 ft)) and Panachaikon in the northwest (1,926 metres (6,319 ft)), Mainalon in the center (1,981 metres (6,499 ft)), and Parnon in the southeast (1,935 metres (6,348 ft)). The entire peninsula is earthquake prone and has been the site of many earthquakes in the past.

Cephalonia or Kefalonia, is the largest of the Ionian Islands in western Greece and the 6th largest island in Greece after Crete, Euboea, Lesbos, Rhodes, and Chios. It is also a separate regional unit of the Ionian Islands region, and the only municipality of the regional unit. It was also a former Latin Catholic diocese Kefalonia–Zakynthos (Cefalonia–Zante) and short-lived titular see as just Kefalonia. The capital city of Cephalonia is Argostoli.

An aition explaining the name of Cephallenia and reinforcing its cultural connections with Athens associates the island with the mythological figure of Cephalus, who helped Amphitryon of Mycenae in a war against the Taphians and Teleboans. He was rewarded with the island of Same, which thereafter came to be known as Cephallenia.

Kefalonia has also been suggested as the Homeric Ithaca, the home of Odysseus, rather than the smaller island bearing this name today. Robert Bittlestone, in his book Odysseus Unbound, has suggested that Paliki, now a peninsula of Cephalonia, was a separate island during the late Bronze Age, and it may be this which Homer was referring to when he described Ithaca. A project which started in the summer of 2007 and lasted three years has examined this possibility.

Kefalonia is also referenced in relation to the goddess Britomartis, as the location where she is said to have ‘received divine honours from the inhabitants under the name of Laphria’.

Aerial Greece episode 2: Western civilization began in Greece, and it was in the South where the first chapter of that story was written.

The Americas with Simon Reeve episode 5