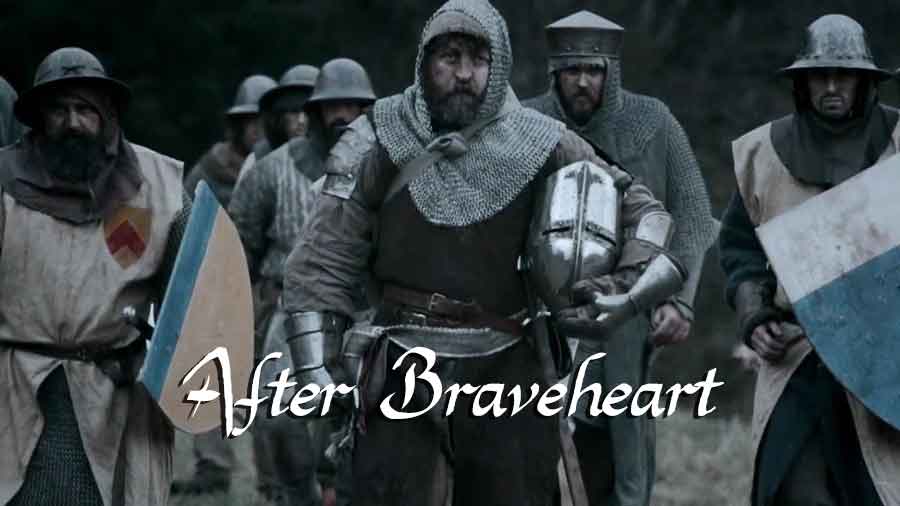 After Braveheart episode 1: This docudrama series reveals the untold story of how a Scottish army tried to drive the English out of Ireland 700 years ago.

This is a story of two Celtic nations, a shared heritage and a forgotten war that could have changed the course of history. Robert Bruce, King of Scotland, decided to invade Ireland to unite the Celtic nations against the English. Now for the first time, these dramatic events are explored on screen.

Robert I (11 July 1274 – 7 June 1329), popularly known as Robert the Bruce, was King of Scots from 1306 to his death in 1329. He was one of the most famous warriors of his generation and eventually led Scotland during the First War of Scottish Independence against England. He fought successfully during his reign to regain Scotland’s place as an independent country and is now revered in Scotland as a national hero.

His paternal fourth great-grandfather was King David I. His maternal line is descended from Aoife MacMurrough of Leinster. Robert’s grandfather, Robert de Brus, 5th Lord of Annandale, was one of the claimants to the Scottish throne during the “Great Cause”. As Earl of Carrick, Robert the Bruce supported his family’s claim to the Scottish throne and took part in William Wallace’s revolt against Edward I of England.

Appointed in 1298 as a Guardian of Scotland alongside his chief rival for the throne, John III Comyn, Lord of Badenoch, and William Lamberton, Bishop of St Andrews, Robert resigned in 1300 because of his quarrels with Comyn and the apparently-imminent restoration of John Balliol to the Scottish throne. After submitting to Edward I in 1302 and returning to “the king’s peace”, Robert inherited his family’s claim to the Scottish throne upon his father’s death.

Four years later, Robert received papal recognition as king of an independent Scotland. The Franco-Scottish alliance was renewed in the Treaty of Corbeil, by which the Scots were obliged to make war on England should hostilities break out between England and France. In 1327, the English deposed Edward II in favour of his son and peace was made with Scotland. This included a total renunciation of all English claims to superiority over Scotland. Robert died on 7 June 1329. He was buried at Dunfermline. He requested that his heart be taken to the Holy Land, but it only got as far as Spain. It was returned to Scotland and buried in Melrose Abbey.

After Braveheart episode 1: The untold story of how a Scottish army tried to drive the English out of Ireland 700 years ago.