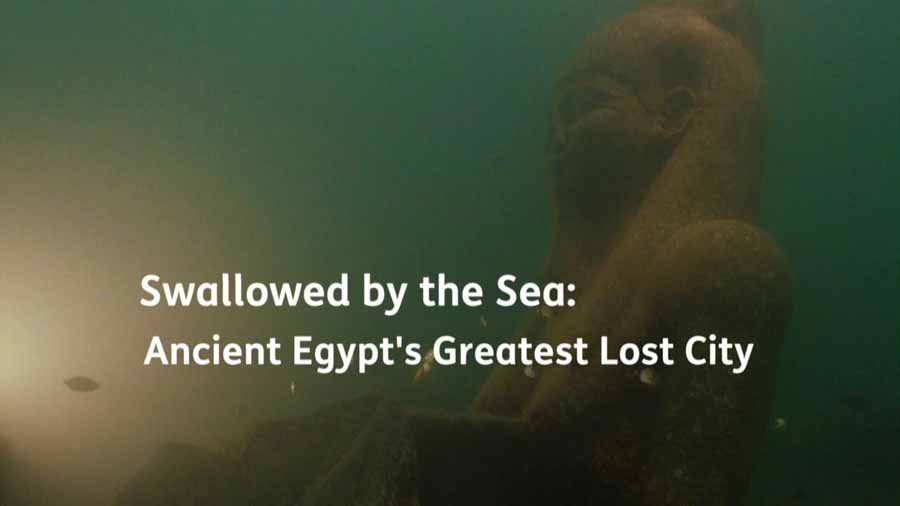 Ancient Egypt’s Greatest Lost City: Documentary following a team of maritime archaeologists as they uncover the remarkable city of Heracleion, lost to the sea and forgotten for over two thousand years.

In the fading days of the pharaohs, the city of Heracleion was the gateway to Egypt and a port beyond compare. In the 4th century BC, this was an opulent and prosperous place adorned with statues and sphinxes. It was a city of religious significance and home to the temple of Amun. In the 2nd century BC it was wiped off the face of the earth. In a mysterious subsidence, the coastline dropped by over 20ft and Heracleion was consumed by the sea. The lost city slept for centuries beneath the waters of the Mediterranean.

In 2000, archaeologists made an incredible find. Using ancient texts, they discovered the city’s remains six kilometres off the Egyptian coast and only 10 metres underwater. Pristinely preserved, it is an archaeological jewel – an ancient Egyptian city frozen in time. The glorious temples, statues, houses and boats of the cities lie perfectly preserved by the sea, providing a snapshot of ancient Egyptian life. But many mysteries remain. What caused this sacred city to plunge into the sea? And why did its inhabitants deliberately sink over 65 ancient warships?

Heracleion was originally built on some adjoining islands in the Nile Delta. It was intersected by canals with a number of harbors and anchorages. Its wharves, temples and tower-houses were linked by ferries, bridges, and pontoons. The city was an emporion and in the Late Period of ancient Egypt it was the country’s main port for international trade and collection of taxes. It had a sister city, Naucratis, which was another trading port lying 72 km (45 mi) further up the Nile. Goods were transferred inland via Naucratis, or they were transported via the Western Lake and through a water channel to the nearby town of Canopus for onward distribution.

Heracleion had a large temple of Khonsou, son of Amun, who was known to the Greeks as Herakles. Later, the worship of Amun became more prominent. During the time when the city especially flourished between the 6th and 4th centuries BC, a large temple of Amun-Gereb, was located in the middle of the city. Pharaoh Nectanebo I made many additions to the temple in the 4th century B.C. Sanctuaries in Heracleion dedicated to Osiris and other gods were famous for miraculous healing and attracted pilgrims from a wide area. The city was the site of the celebration of the “Mysteries of Osiris” each year during the month of Khoiak. The god in his ceremonial boat was brought in procession from the temple of Amun in that city to his shrine in Canopus.

Ancient Egypt's Greatest Lost City: Documentary following a team of maritime archaeologists as they uncover the remarkable city of Heracleion.