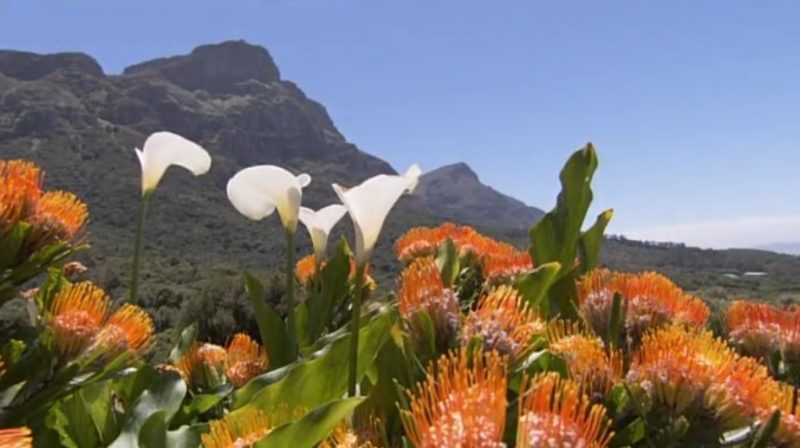 In Around the World in 80 Gardens ep 8, Monty Don visits Cape Town’s famous Kirstenbosch Botanic Gardens he sees the King Proteus, South Africa’s national plant. In the Drakensberg Mountains he sees some native flora in its natural environment.

Around the World in 80 Gardens ep 8

His favourite garden is a school vegetable patch in Thembisa, one of Johannesburg’s townships. Monty is intrigued by how gardening styles have changed here since the Dutch first settled in the 19th century.

Around the World in 80 Gardens is a BBC series that follows broadcaster Monty Don as he travels all over the planet searching for world-class gardens – ancient and modern, large and small, grand and humble.

Kirstenbosch is an important botanical garden nestled at the eastern foot of Table Mountain in Cape Town. The garden is one of ten National Botanical Gardens covering five of South Africa’s six different biomes and administered by the South African National Biodiversity Institute (SANBI). Prior to 1 September 2004, the institute was known as the National Botanical Institute.

When Kirstenbosch, the most famous of the gardens, was founded in 1913 to preserve the country’s unique flora, it was the first botanical garden in the world with this ethos. Kirstenbosch places a strong emphasis on the cultivation of indigenous plants.

The garden includes a large conservatory (The Botanical Society Conservatory) exhibiting plants from a number of different regions, including savanna, fynbos, karoo and others. Outdoors, the focus is on plants native to the Cape region, highlighted by the spectacular collections of proteas.

In 1660, by order of Jan van Riebeek, a hedge of Wild Almond and brambles was planted to afford some protection to the perimeter of the Dutch colony. Sections of this hedge, named Van Riebeek’s Hedge, still exist in Kirstenbosch. The hedge is a Provincial Heritage Site. The area of the botanical garden was used for the harvesting of timber during this period.