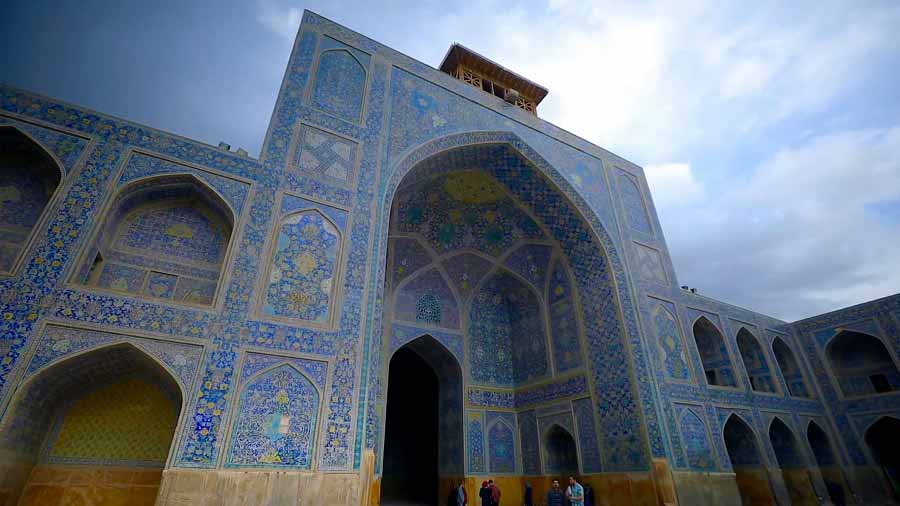 Art of Persia episode 3: In the last episode, Samira Ahmed travels to the crumbling ruins of an ancient walled city and goes back to when Persia faced her gravest threat – Genghis Khan. But from the death and destruction there emerged a golden age of Persian poetry and art.

In the fabled city of Isfahan, Samira encounters the dynasty of shahs that succeeded the Mongols – the Safavids, who gave Iran a powerful new identity through Shia Islam and carved its message in stone, brick and tile.

Finally, Samira travels to Persepolis to tell the story of Iran’s last shah and his ill-fated attempt to link his dynasty to Persia’s ancient kings, with momentous consequences for the world.

Persia (roughly modern-day Iran) is among the oldest inhabited regions in the world. Archaeological sites in the country have established human habitation dating back 100,000 years to the Paleolithic Age with semi-permanent settlements (most likely for hunting parties) established before 10,000 BCE. The ancient kingdom of Elam in this area was among the most advanced of its time (its oldest settlement, the archaeological site of Chogha Bonut, dates to c. 7200 BCE) before parts of it were conquered by the Sumerians, later completely by the Assyrians, and then by the Medes.

The Median Empire (678-550 BCE) was followed by one of the greatest political and social entities of the ancient world, the Persian Achaemenid Empire (550-330 BCE) which was conquered by Alexander the Great and later replaced by the Seleucid Empire (312-63 BCE), Parthia (247 BCE-224 CE), and the Sassanian Empire (224 – 651 CE) in succession. The Sassanian Empire was the last of the Persian governments to hold the region before the Muslim Arab conquest of the 7th century CE.

Archaeological finds, such as Neanderthal seasonal settlements and tools, trace human development in the region from the Paleolithic through the Neolithic and Chalcolithic Ages. The city of Susa (modern-day Shushan), which would later become part of Elam and then Persia, was founded in 4395 BCE, making it among the oldest in the world. Although Susa is often equated with Elam, they were different polities; Susa was founded before even the Proto-Elamite Period (c. 3200-2700 BCE) though it was contemporaneous with Elamite culture.

Genghis Khan, also officially Genghis Emperor, was the founder and first Great Khan and Emperor of the Mongol Empire, which became the largest contiguous empire in history after his death. He came to power by uniting many of the nomadic tribes of Northeast Asia.

After founding the Empire and being proclaimed Genghis Khan, he launched the Mongol invasions that conquered most of Eurasia. Campaigns initiated in his lifetime include those against the Qara Khitai, Khwarezmia, and the Western Xia and Jin dynasties, and raids into Medieval Georgia, the Kievan Rus’, and Volga Bulgaria.

These campaigns were often accompanied by large-scale massacres of the civilian populations, especially in the Khwarazmian- and Western Xia–controlled lands. Because of this brutality, which left millions dead, he is considered by many to have been a brutal ruler. By the end of his life, the Mongol Empire occupied a substantial portion of Central Asia and China. Due to his exceptional military successes, Genghis Khan is often considered to be the greatest conqueror of all time.

Persepolis was the ceremonial capital of the Achaemenid Empire (ca. 550–330 BC). It is situated 60 kilometres (37 mi) northeast of the city of Shiraz in Fars Province, Iran. The earliest remains of Persepolis date back to 515 BC. It exemplifies the Achaemenid style of architecture. UNESCO declared the ruins of Persepolis a World Heritage Site in 1979.

Persepolis is derived from Ancient Greek: Περσέπολις, romanized: Persepolis, a compound of Pérsēs (Πέρσης) and pólis (πόλις), meaning “the Persian city” or “the city of the Persians”. To the ancient Persians, the city was known as Pārsa, which is also the word for the region of Persia.

Art of Persia episode 3: In the last episode, Samira Ahmed travels to the crumbling ruins of an ancient walled city and goes back to when Persia faced her gravest threat - Genghis Khan.