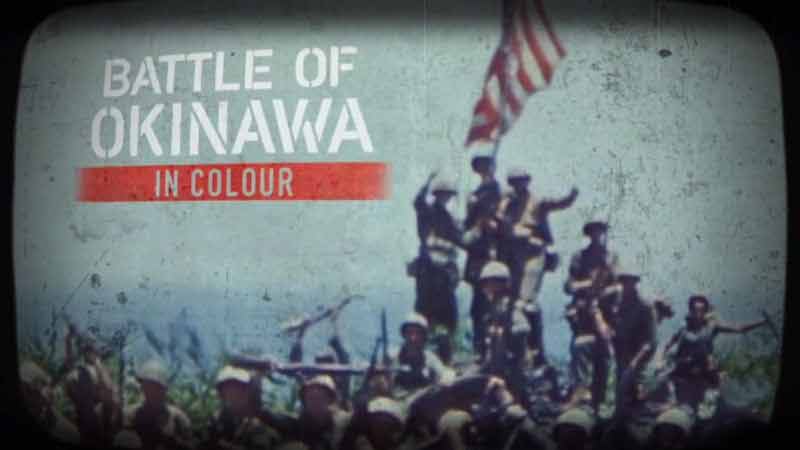 Battle of Okinawa in Color: By mid-1945, Hitler is dead and the war has ended in Europe. Halfway around the world, however, the fighting is still going strong on a small island in the Pacific. Okinawa was the site of the last battle of the last great war of the 20th century, with a casualty rate in the tens of thousands.

Through it all, military cameramen risked their lives to film the conflict, from brutal land combat to fierce kamikaze attacks at sea. See the footage they captured and experience this intense battle the way the soldiers saw it, in color.

The Battle of Okinawa, codenamed Operation Iceberg, was a major battle of the Pacific War fought on the island of Okinawa by United States Army and United States Marine Corps (USMC) forces against the Imperial Japanese Army. The initial invasion of Okinawa on April 1, 1945, was the largest amphibious assault in the Pacific Theater of World War II. The Kerama Islands surrounding Okinawa were preemptively captured on March 26, (L-6) by the 77th Infantry Division. The 98-day battle lasted from March 26 until July 2, 1945. After a long campaign of island hopping, the Allies were planning to use Kadena Air Base on the large island of Okinawa as a base for Operation Downfall, the planned invasion of the Japanese home islands, 340 mi (550 km) away.

The United States created the Tenth Army, a cross-branch force consisting of the US Army 7th, 27th, 77th and 96th Infantry Divisions with the USMC 1st, 2nd, and 6th Marine Divisions, to fight on the island. The Tenth was unique in that it had its own Tactical Air Force (joint Army-Marine command), and was also supported by combined naval and amphibious forces.

The battle has been referred to as the “typhoon of steel” in English, and tetsu no ame (“rain of steel”) or tetsu no bōfū (“violent wind of steel”) in Japanese. The nicknames refer to the ferocity of the fighting, the intensity of Japanese kamikaze attacks and the sheer numbers of Allied ships and armored vehicles that assaulted the island. The battle was one of the bloodiest in the Pacific, with approximately 160,000 casualties on both sides: at least 50,000 Allied and 84,166–117,000 Japanese, including drafted Okinawans wearing Japanese uniforms. 149,425 Okinawans were killed, died by suicide or went missing, roughly half of the estimated pre-war 300,000 local population.

Battle of Okinawa in Color: Okinawa was the site of the last battle of the last great war of the 20th century.

Around the World in 80 Treasures episode 3 – Australia to Cambodia