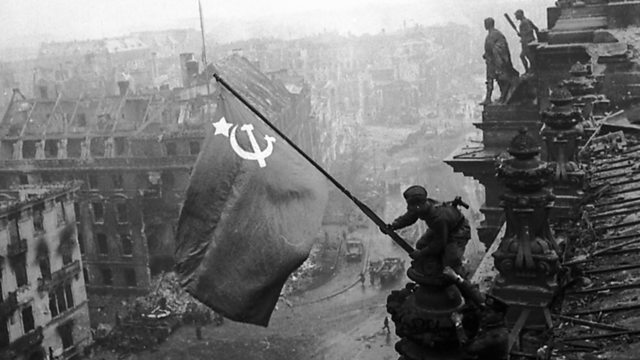 Berlin 1945 episode 2: On 30 April, the Red Flag flies over the Reichstag. National Socialism is finally beaten, along with Germany and Berlin. But for many, the fall of Nazism spells liberation rather than defeat.

The Battle for Berlin has begun. Step by step, the soon-to-be victorious powers advance. On 30 April, the Red Flag flies over the Reichstag and Adolf Hitler takes his own life. Another seven days pass before the Wehrmacht disassembles. National Socialism is finally beaten, along with Germany and Berlin. But for many, the fall of Nazism spells liberation rather than defeat.

Berlin is the capital and largest city of Germany by both area and population. Its 3,769,495 inhabitants as of 31 December 2019 make it the most populous city of the European Union, according to population within city limits. The city is also one of Germany’s 16 federal states. It is surrounded by the state of Brandenburg, and contiguous with Potsdam, Brandenburg’s capital. The two cities are at the center of the Berlin-Brandenburg capital region, which is, with about six million inhabitants and an area of more than 30,000 km2, Germany’s third-largest metropolitan region after the Rhine-Ruhr and Rhine-Main regions.

During World War II, large parts of Berlin were destroyed during 1943–45 Allied air raids and the 1945 Battle of Berlin. The Allies dropped 67,607 tons of bombs on the city, destroying 6,427 acres of the built up area. Around 125,000 civilians were killed. After the end of the war in Europe in May 1945, Berlin received large numbers of refugees from the Eastern provinces. The victorious powers divided the city into four sectors, analogous to the occupation zones into which Germany was divided. The sectors of the Western Allies (the United States, the United Kingdom and France) formed West Berlin, while the Soviet sector formed East Berlin.

Berlin 1945 episode 2: 30 April, the Red Flag flies over the Reichstag. National Socialism is finally beaten, along with Germany and Berlin.

A History of Christianity episode 4 – Reformation – The Individual Before God