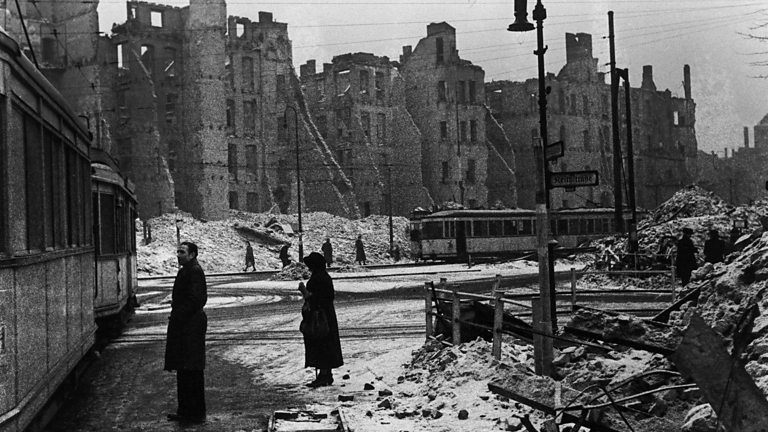 Berlin 1945 episode 1: Journey back in time to Berlin’s most fateful year – 1945 – through the eyes and voices of those who experienced it – ordinary German people and the Allies who entered the city.

At the beginning of 1945, Berlin remains under the spell of the Nazi promise of salvation, an illusion at odds with the city’s daily reality. Every day there are bombing attacks, fires to be extinguished and corpses to be buried. Life goes on as the front lines of the war close in each day. Death comes for men, women, the old, the young, the National Socialists and the forced labourers.

In April, the Red Army stands ready outside the city. In a time of uncertainty on the front lines, nobody has a clear view of what will happen. Civilians hiding, SS soldiers shooting deserters, and Red Army soldiers hoping to survive the final days of the war. As the war comes closer and closer to the metropolis, it returns everything to its roots, showing no mercy.

Berlin is the capital and largest city of Germany by both area and population. Its 3,769,495 inhabitants as of 31 December 2019 make it the most populous city of the European Union, according to population within city limits. The city is also one of Germany’s 16 federal states. It is surrounded by the state of Brandenburg, and contiguous with Potsdam, Brandenburg’s capital. The two cities are at the center of the Berlin-Brandenburg capital region, which is, with about six million inhabitants and an area of more than 30,000 km2, Germany’s third-largest metropolitan region after the Rhine-Ruhr and Rhine-Main regions.

During World War II, large parts of Berlin were destroyed during 1943–45 Allied air raids and the 1945 Battle of Berlin. The Allies dropped 67,607 tons of bombs on the city, destroying 6,427 acres of the built up area. Around 125,000 civilians were killed. After the end of the war in Europe in May 1945, Berlin received large numbers of refugees from the Eastern provinces. The victorious powers divided the city into four sectors, analogous to the occupation zones into which Germany was divided. The sectors of the Western Allies (the United States, the United Kingdom and France) formed West Berlin, while the Soviet sector formed East Berlin.

Berlin 1945 episode 1: Journey back in time to Berlin's most fateful year - 1945 - through the eyes and voices of those who experienced it