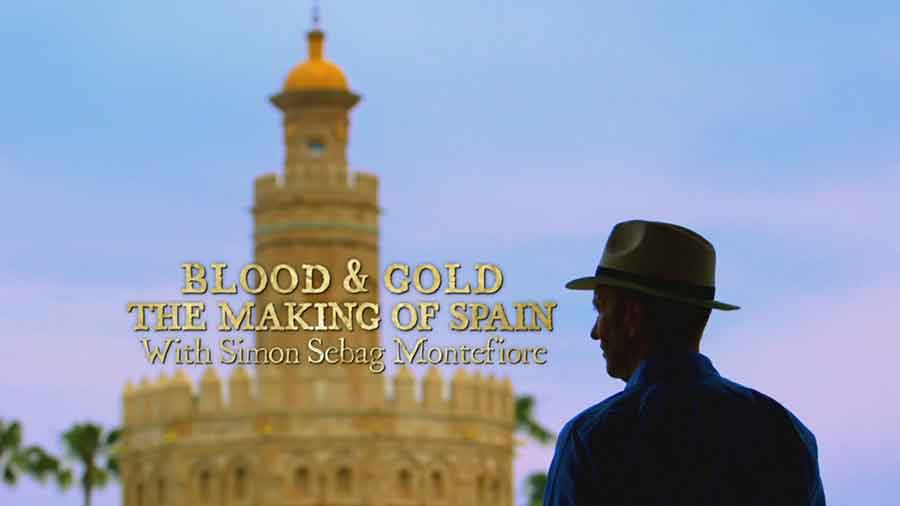 Blood and Gold - The Making of Spain episode 1

Blood and Gold – The Making of Spain episode 1: In the first episode, Simon explores Spain’s early years, its emergence as the battleground of empires and its golden age under the Cordoba Caliphate.

Blood and Gold: The Making of Spain with Simon Sebag Montefiore

The Caliphate of Córdoba was a state in Islamic Iberia along with a part of North Africa ruled by the Umayyad dynasty. The state, with the capital in Córdoba, existed from 929 to 1031. The region was formerly dominated by the Umayyad Emirate of Córdoba (756–929). The period was characterized by an expansion of trade and culture, and saw the construction of masterpieces of al-Andalus architecture. In January 929, Abd ar-Rahman III proclaimed himself Caliph of Córdoba, replacing thus his original title of Emir of Córdoba. He was a member of the Umayyad dynasty, which had held the title of Emir of Córdoba since 756.

The caliphate disintegrated during the Fitna of al-Andalus, a civil war between the descendants of the last caliph, Hisham II, and the successors of his hayib (court official), Al-Mansur. In 1031, after years of infighting, the caliphate fractured into a number of independent Muslim taifa (kingdoms).

Córdoba was the cultural centre of al-Andalus. Mosques, such as the Great Mosque, were the focus of many caliphs’ attention. The caliph’s palace, Medina Azahara is on the outskirts of the city, where an estimated 10,000 laborers and artisans worked for decades on the palace, constructing the decorated buildings and courtyards filled with fountains and airy domes. Córdoba was also the intellectual centre of al-Andalus, with translations of ancient Greek texts into Arabic, Latin and Hebrew. During the reign of al-Hakam II, the royal library possessed an estimated 500,000 volumes.

For comparison, the Abbey of Saint Gall in Switzerland contained just over 100 volumes. The university in Córdoba became the most celebrated in the world. It was attended by Christian students from all Western Europe, as well as Muslim students. The university produced one hundred and fifty authors. Other universities and libraries were scattered through Spain during this golden age. During the Caliphate period, relations between Jews and Arabs were cordial; Jewish stonemasons helped build the columns of the Great Mosque.

Advances in science, history, geography, philosophy, and language occurred during the Caliphate. Al-Andalus was subject to eastern cultural influences as well. The musician Ziryab is credited with bringing hair and clothing styles, toothpaste, and deodorant from Baghdad to the Iberian peninsula.

The economy of the caliphate was diverse and successful, with trade predominating. Muslim trade routes connected al-Andalus with the outside world via the Mediterranean. Industries revitalized during the caliphate included textiles, ceramics, glassware, metalwork, and agriculture.

The Arabs introduced crops such as rice, watermelon, banana, eggplant and hard wheat. Fields were irrigated with water wheels. Some of the most prominent merchants of the caliphate were Jews. Jewish merchants had extensive networks of trade that stretched the length of the Mediterranean Sea.

Since there was no international banking system at the time, payments relied on a high level of trust, and this level of trust could only be cemented through personal or family bonds, such as marriage. Jews from al-Andalus, Cairo, and the Levant all intermarried across borders. Therefore, Jewish merchants in the caliphate had counterparts abroad that were willing to do business with them.

Al-Andalus – Blood and Gold – The Making of Spain episode 1

Al-Andalus was the name of the Iberian Peninsula, given by the Moors during the Middle Ages. At its greatest geographical extent, its territory occupied most of the peninsula and a part of present-day southern France, Septimania (8th century), and for nearly a century (9th–10th centuries) extended its control from Fraxinet over the Alpine passes which connect Italy to Western Europe.

The name more specifically describes the different Arab or Berber states that controlled these territories at various times between 711 and 1492, though the boundaries changed constantly as the Christian Reconquista progressed, eventually shrinking to the south and finally to the vassalage of the Emirate of Granada.

In 756, the exiled Umayyad prince Abd al-Rahman I (nicknamed al-Dākhil, the ‘Immigrant’) ousted Yūsuf al-Fihri to establish himself as the Emir of Córdoba. He refused to submit to the Abbasid caliph, as Abbasid forces had killed most of his family. Over a thirty-year reign, he established a tenuous rule over much of al-Andalus, overcoming partisans of both the al-Fihri family and of the Abbasid caliph.

Title
The Making of Spain
Description

The Making of Spain ep. 1: Spain's early years, its emergence as the battleground of empires and its golden age under the Cordoba Caliphate