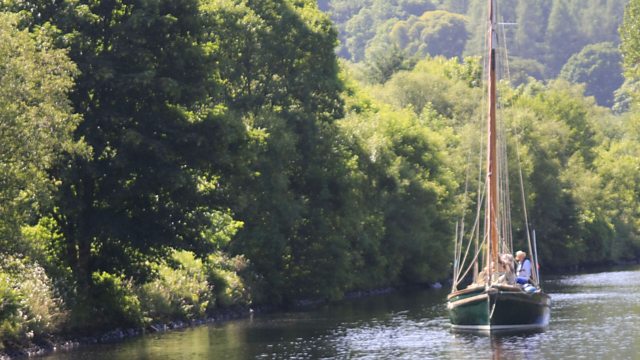 Britain and the Sea episode 3

Britain and the Sea episode 3: This third episode traces the crucial importance of the sea to Britain’s trade and to individual livelihoods of coastal communities. Joined on this leg of his epic sail by his son Fred, David follows the trade routes of the west coast of Scotland along the monumental channels that cut through the romantic Highlands and brought wealth and prosperity to the heart of Scotland.

The journey starts at Craobh Haven and takes David along the Crinan Canal, around the Isle of Bute and up the River Clyde towards Glasgow. David Dimbleby takes to his wooden sailing boat to explore Britain’s rich maritime heritage.

Britain and the Sea episode 3

The Crinan Canal between Crinan and Ardrishaig in Argyll and Bute in the west of Scotland is operated by Scottish Canals. The canal, which opened in 1801, takes its name from the village of Crinan at its western end. Approximately nine miles (14 km) long, the canal connects the village of Ardrishaig on Loch Gilp with the Sound of Jura, providing a navigable route between the Clyde and the Inner Hebrides, without the need for a long diversion around the Kintyre peninsula, and in particular the exposed Mull of Kintyre.

The canal was built to provide a short cut for commercial sailing and fishing vessels and later Clyde puffers to travel between the industrialised region around Glasgow to the West Highland villages and islands. It was designed by civil engineer John Rennie and work started in 1794, but was not completed until 1801, two years later than planned. The canal’s construction was beset with problems including finance and poor weather. Landowners demanded high prices for their land and navvies were reluctant to leave jobs in more accessible parts of England and Scotland. The construction cost £127,000 (equivalent to £10,290,000 in 2021).

The Isle of Bute , is an island in the Firth of Clyde in Scotland, United Kingdom. It is divided into highland and lowland areas by the Highland Boundary Fault.

Formerly a constituent island of the larger County of Bute, it is now part of the council area of Argyll and Bute. Bute’s resident population was 6,498 in 2011, a decline of just over 10% from the figure of 7,228 recorded in 2001 against a background of Scottish island populations as a whole growing by 4% to 103,702 for the same period.

Bute lies in the Firth of Clyde. The only town on the island, Rothesay, (NS087645) is linked by ferry to the mainland. To its north is the coastal village of Port Bannatyne; hamlets on the island include Ascog, Kilchattan Bay, and Kingarth. The interior of the island is hilly, though not mountainous, with conifer plantations and some uncultivated land, particularly in the north. The highest point is Windy Hill at 278 metres (912 ft). The centre of the island contains most of the cultivated land, while the island’s most rugged terrain is found in the far south around Glen Callum. Loch Fad is Bute’s largest body of freshwater and runs along the fault line.

The western side of Bute is known for its beaches, many of which enjoy fine views over the Sound of Bute towards Arran and Bute’s smaller satellite island Inchmarnock. Hamlets on the western side of the island include Straad, around St. Ninian’s Bay, and Kildavanan on Ettrick Bay.

Britain and the Sea episode 3: This third episode traces the crucial importance of the sea to Britain's trade and to individual livelihoods of coastal communities