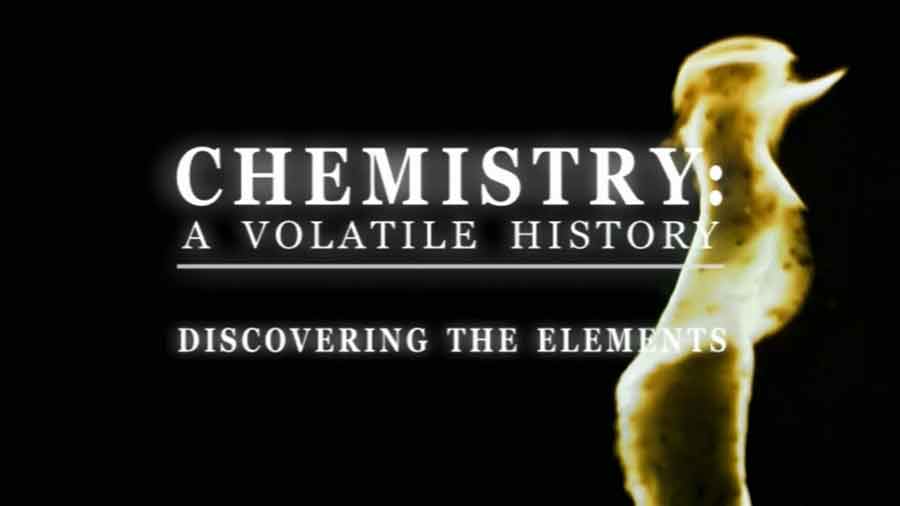 Chemistry – A Volatile History episode 1: The explosive story of chemistry is the story of the building blocks that make up our entire world – the elements. From fiery phosphorous to the pure untarnished lustre of gold and the dazzle of violent, violet potassium, everything is made of elements – the earth we walk on, the air we breathe, even us. Yet for centuries this world was largely unknown, and completely misunderstood.

In this three-part series, professor of theoretical physics Jim Al-Khalili traces the extraordinary story of how the elements were discovered and mapped. He follows in the footsteps of the pioneers who cracked their secrets and created a new science, propelling us into the modern age.

Just 92 elements made up the world, but the belief that there were only four – earth, fire, air and water – persisted until the 19th century. Professor Al-Khalili retraces the footsteps of the alchemists who first began to question the notion of the elements in their search for the secret of everlasting life.

He reveals the red herrings and rivalries which dogged scientific progress, and explores how new approaches to splitting matter brought us both remarkable elements and the new science of chemistry.

Chemistry is the scientific discipline involved with elements and compounds composed of atoms, molecules and ions: their composition, structure, properties, behavior and the changes they undergo during a reaction with other substances.

In the scope of its subject, chemistry occupies an intermediate position between physics and biology. It is sometimes called the central science because it provides a foundation for understanding both basic and applied scientific disciplines at a fundamental level. For example, chemistry explains aspects of plant chemistry (botany), the formation of igneous rocks (geology), how atmospheric ozone is formed and how environmental pollutants are degraded (ecology), the properties of the soil on the moon (astrophysics), how medications work (pharmacology), and how to collect DNA evidence at a crime scene (forensics).

Chemistry addresses topics such as how atoms and molecules interact via chemical bonds to form new chemical compounds. There are four types of chemical bonds: covalent bonds, in which compounds share one or more electron(s); ionic bonds, in which a compound donates one or more electrons to another compound to produce ions (cations and anions); hydrogen bonds; and Van der Waals force bonds.