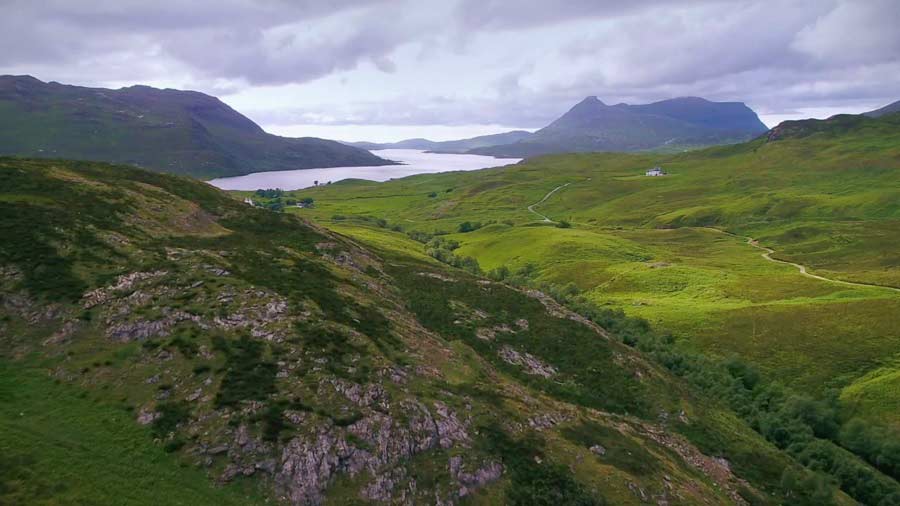 Grand Tours of Scotland’s Lochs episode 5: 1.2 billion years ago, the far north of Sutherland was struck by a meteorite.

The wreckage of this cataclysmic event has been almost completely worn away by time, but the rocks in the landscape still bear some traces, which Paul unpicks as he embarks on a grand tour from Lairg on Loch Shin to Lochinver and, finally, to the summit of Suilven – the sugarloaf mountain.

Loch Shin is a loch in the Scottish North West Highlands. To the south is the small town of Lairg. The loch, the largest in Sutherland, runs from the north-west to the south-east and is 17 miles (27.2 km) long. In the 1950s, the level of the loch was raised by over 30 feet (10 metres) by the construction of Lairg Dam by Wimpey Construction as part of a hydro-electric scheme.

Around the loch are some mountain ranges; the 3,273 foot (998 m) Ben More Assynt in the west and Ben Klibreck (3,154 feet/962 metre) to the east. The loch drains to the North Sea by way of the short River Shin that feeds into the Dornoch Firth. Three miles to the north of Lairg is a monument to remember an early attempt to tame the Highlands. During the 1870s, the Duke of Sutherland ploughed up about 2,000 acres (8 km²), but the industry never rewarded that. Today the area around the loch is one of the major farming centres for sheep in Scotland.

Suilven is a mountain in Scotland. Lying in a remote area in the west of Sutherland, it rises from a wilderness landscape of moorland, bogs, and lochans known as Inverpolly National Nature Reserve. Suilven forms a steep-sided ridge some 2 km in length. The highest point, known as Caisteal Liath (the Grey Castle in Scottish Gaelic), lies at the northwest end of this ridge. There are two other summits: Meall Meadhonach (Middle Round Hill) at the central point of the ridge is 723 m high, whilst Meall Beag (Little Round Hill) lies at the southeastern end.

Grand Tours of Scotland's Lochs episode 5: 1.2 billion years ago, the far north of Sutherland was struck by a meteorite.