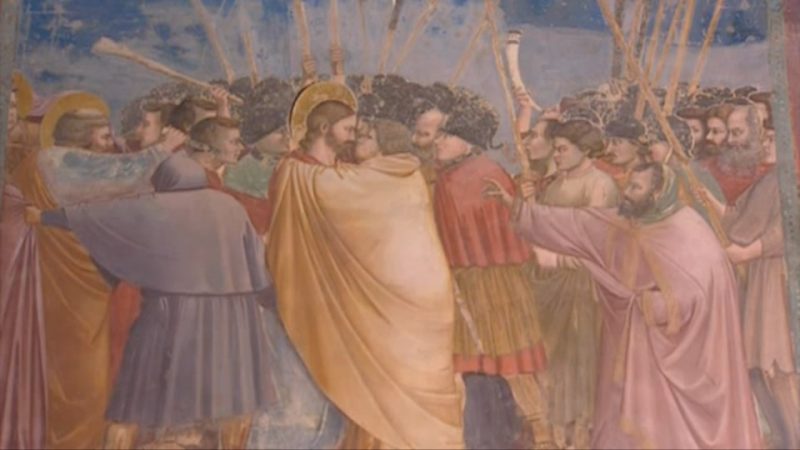 Giotto di Bondone, the son of a Tuscan shepherd. Born in 1267, Giotto began his apprenticeship at the age of 12, and with his naturalistic treatment of medieval Christian iconography, was recognised as the first in a line of great painters and architects who contributed to the Italian Renaissance.

Giotto’s contemporary, the banker and chronicler Giovanni Villani, wrote that Giotto was “the most sovereign master of painting in his time, who drew all his figures and their postures according to nature” and of his publicly recognized “talent and excellence”.

In his Lives of the Most Excellent Painters, Sculptors, and Architects, Giorgio Vasari described Giotto as making a decisive break with the prevalent Byzantine style and as initiating “the great art of painting as we know it today, introducing the technique of drawing accurately from life, which had been neglected for more than two hundred years”.

Giotto’s masterwork is the decoration of the Scrovegni Chapel, in Padua, also known as the Arena Chapel, which was completed around 1305. The fresco cycle depicts the Life of the Virgin and the Life of Christ. It is regarded as one of the supreme masterpieces of the Early Renaissance.

Tim Marlow takes us on a unique tour of the life and times of the artists and examines what makes them great. Each episode takes a fresh look at the artists, their work and the world in which they lived. We learn why John Constable, often considered to be a painter of chocolate box scenes of the English countryside, was in fact, a radical artist of his time. We see how Goya’s masterful painting style and haunting visions combined to produce some of the most powerful images in the history of Western Art.

Giotto di Bondone, born in 1267, began his apprenticeship at the age of 12, and was recognised as the first in a line of great painters and architects.

Art, Passion & Power – The Story of the Royal Collection episode 3