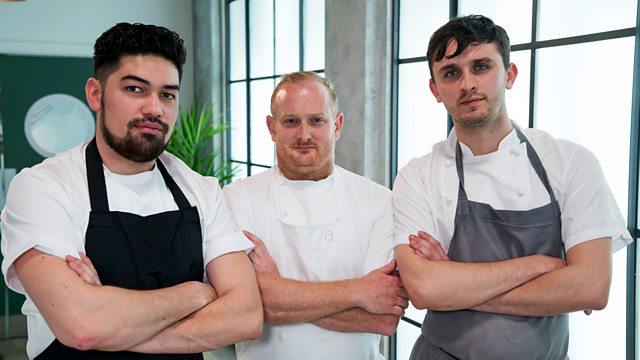 Great British Menu episode 2 2019: the chefs are halfway through their heat and the pressure is mounting. Once again, they each serve a unique take on the brief. For mains, Ben is confident that his dish Blackbird, once again themed around The Beatles, will prove to be his best and most original dish yet. Luke is running around the kitchen with plenty to do to get his duck dish Spice, inspired by his favourite girl band, ready in time. Paul is using London honey for his dish, Let it Bee.

After the nail-biting scoring on the mains dishes, it is the dessert and the chefs’ last chance to impress their veteran judge and stay in the competition to cook for the judges, so tensions are high. Ben finishes his tribute to The Beatles’ White Album, which his grandfather was involved in the design of, with a delicate all-white dessert set in shortcrust pastry.

Paul demonstrates all his culinary skill with an ambitious dessert using layers of different chocolate and hazelnuts, called Tiers in Heaven, inspired by the Eric Clapton song and his love for his children. Luke has also given himself a lot to do with his final dish, a take on millionaire shortbread entitled Going Platinum. Will his white chocolate shards in the mould of a record be ready in time?

This week it is the heats for the London and south east region. Competing for the top spot are three new chefs to the competition representing some of the most exciting culinary talent from London. Paul Walsh is executive chef at Michelin-starred City Social. He won his star there within just a few months of opening. On the other side of town, Luke Selby has just won a Michelin star as head chef at Hide in the West End. Finally, the youngest chef in the competition – Ben Marks is the chef owner of Perilla, in Hackney. He has been described as one of the most exciting new chefs of his generation by world-renowned chef Phil Howard.

Great British Menu episode 2 2019: the chefs are halfway through their heat and the pressure is mounting.