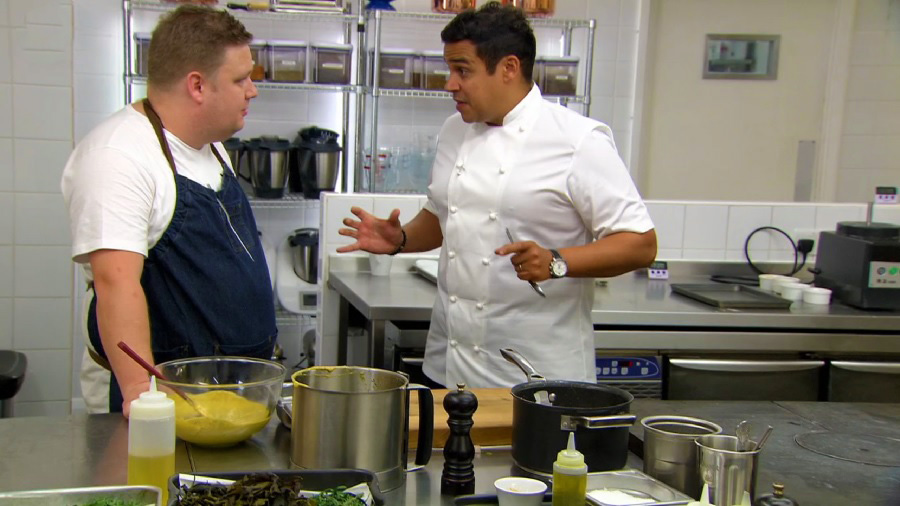 After the starter results, the chefs return to the kitchen hoping for high scores with their fish dishes. Chris once again is using ingredients he has foraged from around his restaurant, while Jason hopes to impress with a spicy scallop dish and Andrew prepares a cod dish with 11 different elements.

This week it is the turn of three chefs representing Wales, who are all first timers in the competition – maverick chef Andrew Sheridan, who trained with Michelin-starred Michael Caines and is now executive chef at Sosban in Llanelli, classical chef Jason Hughes, who, following a stint in the RAF, spent three years with Gordon Ramsay and is now head chef at Anglesey’s Chateau Rhianfa, and Michelin-starred foraging expert Chris Harrod, owner of The Whitebrook in South Wales’s Wye Valley.

Today the three chefs meet their surprise veteran judge and cook their celebratory starters. Andrew is attempting to pay tribute to NHS staff with his innovative take on a traditional healing recipe, ‘Mum’s Flu Fighting Chicken Soup’. Jason’s A Tea from the Heart is a play on a postwar remedy which harks back to the era when the NHS was formed. And Chris is hoping to impress with his dish inspired by a therapeutic hospital garden featuring foraged herbs from the Welsh valley where he lives including wild chervil, pickled pine buds and yarrow tips.

After the starter results, the chefs return to the kitchen hoping for high scores with their fish dishes.