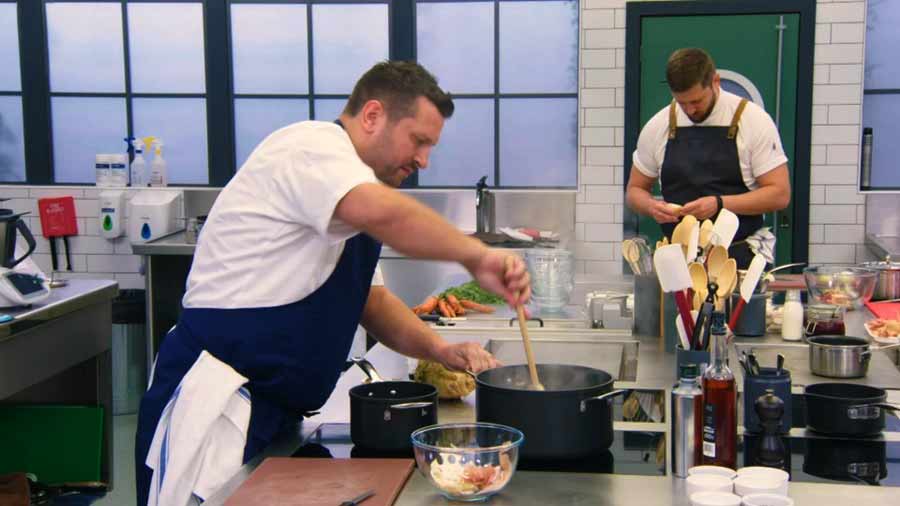 Great British Menu episode 4 2020 – London & South East – Starter & Fish Courses: The competition continues with the heats for London and the south east of England. Competing for the top spot are four new chefs to the competition, representing some of the most formidable culinary talents from London. Steve Groves was crowned Craft Guild’s National Chef of the Year in 2019 and for the last seven years has been head chef at Roux at Parliament Square in London’s Westminster.

Kerth Gumbs, who is originally from Anguilla in the Caribbean, is head chef at Ormer Mayfair, which was voted one of the top five restaurants in London by the Hardens Restaurant Guide in 2018. Karl O’Dell is head chef at one-Michelin-starred Texture in Marylebone and is bringing his modern Scandinavian influences to the competition. Finally, Ivan Tisdall-Downes, head chef at Native near trendy Borough Market since 2016, hopes to knock out his rivals with his modern style that champions zero-waste cooking and natural, foraged, seasonal produce.

Presenter and comedian Susan Calman welcomes them to the competition, which is harder than ever this year with an extra chef to beat and someone leaving daily during the heats. One of the four talented newcomers will be going home, so they have to impress their surprise veteran from the outset. First, they must whip up a new course: an amuse bouche, or appetiser, that will also be served at the banquet this year. Unaware of who their veteran is, the four chefs rustle up delicious morsels, including a crab Johnny cake and a deer stalker pie, and bring them to the pass as Michelin-starred Tommy Banks arrives to pass judgement. Although not officially scored, this mini-course is ranked and used in the event of a tie-break.

As this year’s brief celebrates British success in children’s literature, the chefs are tasked with celebrating acclaimed children’s authors from London and the south east of England. Kerth is celebrating London-born author and illustrator Beatrix Potter in a dish layering textures of carrot and goat’s cheese that brings to life Mr McGregor’s walled garden. Ivan is also running with the carrot theme in a playful zero-waste dish using the whole carrot, tempura tops included, hogseed and vadouvan butter. His Orange Twiglets from Jupiter recipe is inspired by Wiltshire-born author Lauren Child’s Charlie and Lola story I Will Not Ever Never Eat a Tomato. Father-of-two Steve is making a hazelnut dish celebrating London-born author Julia Donaldson’s acclaimed picture book The Gruffalo, and finally Karl is doing a spiced-honey pigeon with a nod to AA Milne’s classic Winnie the Pooh. The scores are critical after the fish course as one of the four is sent home.

The chefs move on to the fish course with Susan giving them support as they try to stay on track and not be the first one to leave. Ivan is sticking to his natural cookery ethos with a chalk stream trout dish with signal crayfish and foraged river herbs. Father-of-four Kerth is hoping to wow with his Commotion in the Ocean dish inspired by Giles Andreae’s book, using native lobster, ginger and coconut. Both Karl and Steve are pinning their hopes on turbot dishes. Steve’s is a classic French dish inspired by Roald Dahl’s The BFG, with a surprise whizzpopper for the veteran, while Karl’s is poached turbot served whole on the bone with a broth that is a gastronomic upgrade on Oliver Twist’s gruel.

With some outstanding dishes receiving high scores, who will be tipped out of the competition and not cook their entire menu? The pressure is on for all the chefs to deliver.