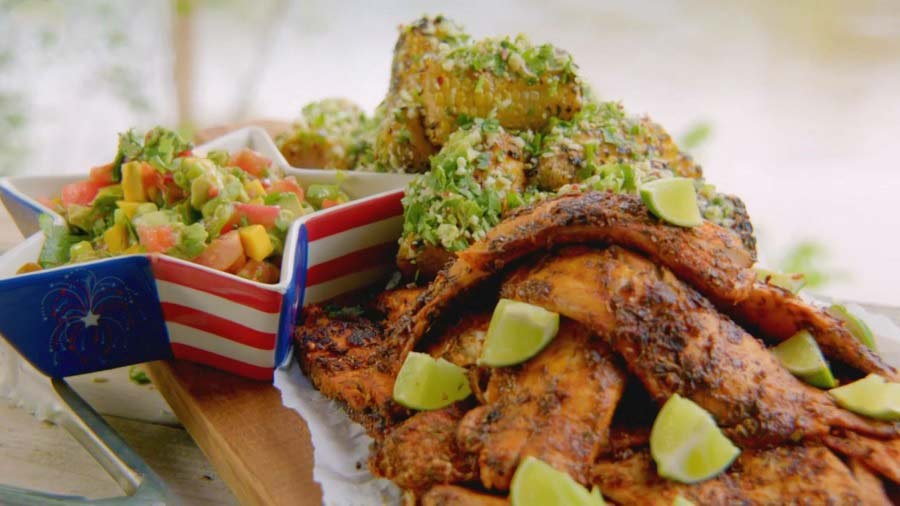 Hairy Bikers – Route 66 episode 2: on the second leg of their Route 66 adventure, Dave and Si set out to discover what lies beneath the legend of this iconic road – a journey which takes them through three states.

At a biker bar in Missouri they are inspired to go fishing on the Big Piney river, before cooking up a dish of blackened fish and dirty corn for the bar’s regulars. Heading west, they then visit a roadside museum described as a love letter to Route 66. The current owner, like her father before her, is passionate about keeping the magic of the fabled road alive.

Next, the bikers ride the route’s thirteen miles through the state of Kansas, stopping for lunch at Old Riverton Store, its oldest continuously operating grocery store. Crossing into Oklahoma, they reach the city of Tulsa, where they realise that since leaving Chicago they have travelled as far south as west, which inspires a visit to the city’s best-known soul food joint. Here they learn of one of the darker chapters in American history, the Tulsa Race Massacre. In 1921, an incident in downtown Tulsa sparked conflict between the city’s white and black communities. The result was the near destruction of Greenwood, the prosperous African American quarter.

After checking out the Woody Guthrie Centre, the bikers get back in touch with Route 66’s present at the Mother Road Food Market. Here they test their skills at its try-out kitchen. How will the locals take to the boys’ yorkshire pudding wraps? Finally, Dave and Si head out to a remote patch of rural Oklahoma to spend time and cook with members of the Cherokee nation.

A delicious and comforting Southern American dish. For a thicker stew, try adding okra at the same time as the butter beans and sweetcorn. Delicious served with cornbread.

Cover the ham hock with water and bring to the boil. Discard the first batch of water if the ham is particularly salty, cover the hock again and return to the boil. Turn down the heat and simmer for about 2 hours, until the meat is falling away from the bone. Strain, reserving the cooking liquid, and discard the rind, bone and any gristle from the ham. Pull the meat apart into thick shreds. Set aside.

Heat the oil in a large casserole. Add the onion, celery, peppers, squash and courgette and cook for 5 minutes until the vegetables are starting to look soft around the edges. Add the garlic, tarragon, sweetcorn and beans and cook for a few more minutes. Put the shredded ham and enough cooking liquid to almost cover. Leave to simmer for 8–10 minutes until the vegetables are just tender and the liquid has reduced down a little.

These cheesy, salty, spicy corn on the cobs make the perfect barbecue side dish. Try serving with this barbecued fish.

This recipe uses sea bream but fillets of any firm white fish, such as catfish or monkfish, would also work well. Delicious served with dirty corn.

Hairy Bikers - Route 66 episode 2: on the second leg of their adventure, Dave and Si set out to discover what lies beneath the legend of this iconic road.