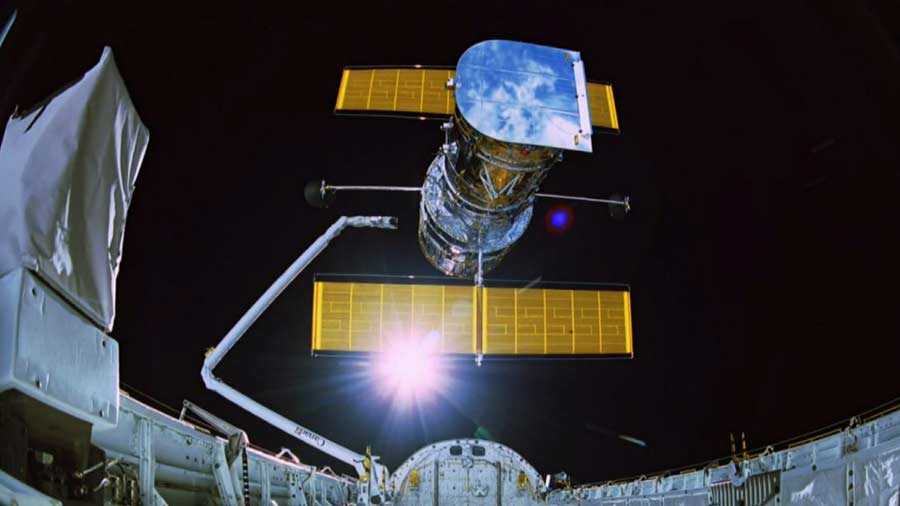 Hubble - The Wonders of Space Revealed

Hubble – The Wonders of Space Revealed: To celebrate the 30th anniversary of its launch, this film tells the remarkable story of how Hubble revealed the awe and wonder of our universe and how a team of daring astronauts risked their lives to keep it working.

Hubble – The Wonders of Space Revealed

The Hubble Space Telescope (often referred to as HST or Hubble) is a space telescope that was launched into low Earth orbit in 1990 and remains in operation. It was not the first space telescope but it is one of the largest and most versatile, well known both as a vital research tool and as a public relations boon for astronomy. The telescope is named after astronomer Edwin Hubble and is one of NASA‘s Great Observatories, along with the Compton Gamma Ray Observatory, the Chandra X-ray Observatory, and the Spitzer Space Telescope.

Hubble features a 2.4-meter (7.9 ft) mirror, and its four main instruments observe in the ultraviolet, visible, and near infrared regions of the electromagnetic spectrum. Hubble’s orbit outside the distortion of Earth’s atmosphere allows it to capture extremely high-resolution images with substantially lower background light than ground-based telescopes. It has recorded some of the most detailed visible light images, allowing a deep view into space. Many Hubble observations have led to breakthroughs in astrophysics, such as determining the rate of expansion of the universe.

Edwin Powell Hubble (November 20, 1889 – September 28, 1953) was an American astronomer. He played a crucial role in establishing the fields of extragalactic astronomy and observational cosmology and is regarded as one of the most important astronomers of all time.

Hubble proved that many objects previously thought to be clouds of dust and gas and classified as “nebulae” were actually galaxies beyond the Milky Way. He used the strong direct relationship between a classical Cepheid variable’s luminosity and pulsation period (discovered in 1908 by Henrietta Swan Leavitt) for scaling galactic and extragalactic distances.

Hubble provided evidence that the recessional velocity of a galaxy increases with its distance from the Earth, a property now known as “Hubble’s law”, despite the fact that it had been both proposed and demonstrated observationally two years earlier by Georges Lemaître. The Hubble–Lemaître law implies that the universe is expanding. A decade before, the American astronomer Vesto Slipher had provided the first evidence that the light from many of these nebulae was strongly red-shifted, indicative of high recession velocities.

Hubble - The Wonders of Space Revealed: To celebrate the 30th anniversary of its launch, this film tells the remarkable story of Hubble