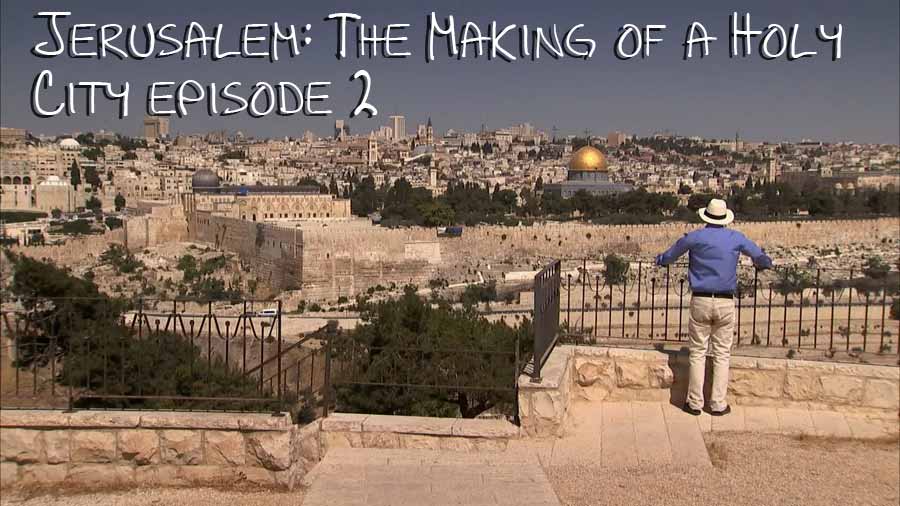 Jerusalem – The Making of a Holy City episode 2: In episode two, Simon discovers the impact on the holy city of a new faith – Islam. He explores Muhammad’s relationship with Jerusalem, the construction of one of Islam’s holiest shrines – the Dome of the Rock – and the crusaders’ attempts to win it back for Christianity.

Jerusalem is one of the oldest cities in the world. For the Jewish faith, it is the site of the western wall, the last remnant of the second Jewish temple. And for Christians, the Church of the Holy Sepulchre is the site of the death and resurrection of Jesus Christ. For Muslims, the Al-Aqsa mosque is the third holiest sanctuary of Islam.

He also brings to life lesser-known characters, whose impact still resonates – Al Hakim’s destructive delusions of grandeur and Queen Melisende’s embellishment of crusader Jerusalem, as well as the notorious stand-off between Saladin and Richard the Lionheart.

The episode ends in the 13th century with King Frederick II, whose groundbreaking power-sharing deal prefigures the tortuous peace negotiations of our own times. Then, as now, peace did not last.

Jerusalem is a city in the Middle East, located on a plateau in the Judaean Mountains between the Mediterranean and the Dead Sea. It is one of the oldest cities in the world, and is considered holy to the three major Abrahamic religions—Judaism, Christianity, and Islam. Both Israel and the Palestinian Authority claim Jerusalem as their capital, as Israel maintains its primary governmental institutions there and the State of Palestine ultimately foresees it as its seat of power; however, neither claim is widely recognized internationally.

During its long history, Jerusalem has been destroyed at least twice, besieged 23 times, captured and recaptured 44 times, and attacked 52 times. The part of Jerusalem called the City of David shows first signs of settlement in the 4th millennium BCE, in the shape of encampments of nomadic shepherds. Jerusalem was named as Urusalim on ancient Egyptian tablets, probably meaning “City of Shalem” after a Canaanite deity, during the Canaanite period (14th century BCE).

Dome of the Rock

The Dome of the Rock is an Islamic shrine located on the Temple Mount in the Old City of Jerusalem. It was initially completed in 691–92 CE at the order of Umayyad Caliph Abd al-Malik during the Second Fitna on the site of the Second Jewish Temple, destroyed during the Roman Siege of Jerusalem in 70 CE. The original dome collapsed in 1015 and was rebuilt in 1022–23. The Dome of the Rock is in its core one of the oldest extant works of Islamic architecture.

Its architecture and mosaics were patterned after nearby Byzantine churches and palaces, although its outside appearance has been significantly changed in the Ottoman period and again in the modern period, notably with the addition of the gold-plated roof, in 1959–61 and again in 1993. The octagonal plan of the structure may have been influenced by the Byzantine Church of the Seat of Mary (also known as Kathisma in Greek and al-Qadismu in Arabic) built between 451 and 458 on the road between Jerusalem and Bethlehem.

An-Nasir Salah ad-Din Yusuf ibn Ayyub, known as Salah ad-Din or Saladin (1137 – 4 March 1193), was the first sultan of Egypt and Syria and the founder of the Ayyubid dynasty. A Sunni Muslim of Kurdish ethnicity, Saladin led the Muslim military campaign against the Crusader states in the Levant. During his reign, Saladin has been described as the de facto Caliph of Islam and at the height of his power, his caliphate included Egypt, Syria, Upper Mesopotamia, the Hejaz, Yemen and other parts of North Africa.

Title
Jerusalem: The Making of a Holy City episode 2
Description

Jerusalem: The Making of a Holy City episode 2: In episode two, Simon discovers the impact on the holy city of a new faith - Islam.