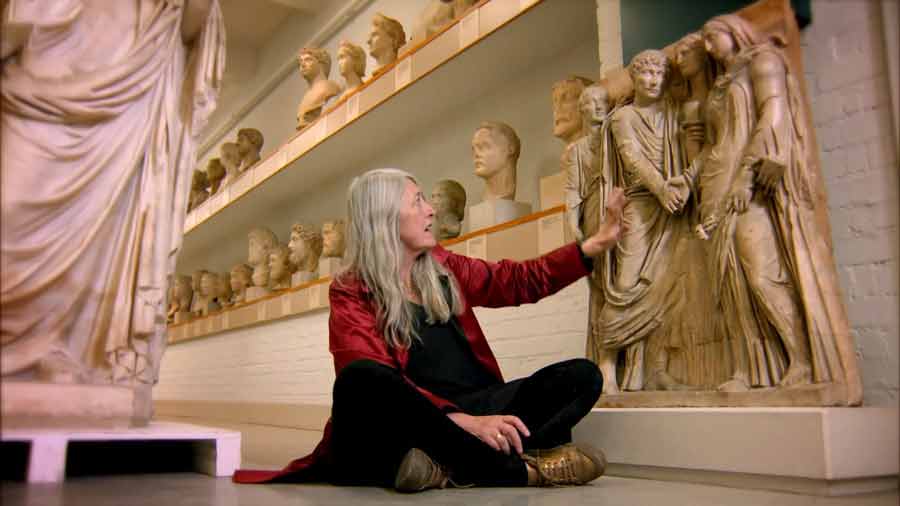 Meet the Romans with Mary Beard episode 3 - Behind Closed Doors

Meet the Romans with Mary Beard episode 3 – Behind Closed Doors: We still live in the shadow of ancient Rome – a city at the heart of a vast empire that stretched from Scotland to Afghanistan, dominating the West for over 700 years. Professor Mary Beard puts aside the stories of emperors and armies, guts and gore, to meet the real Romans living at the heart of it all.

In this final episode, Mary delves even deeper into ordinary Roman life by going behind the closed doors of their homes. She meets an extraordinary cast of characters – drunken housewives, teenage brides, bullied children and runaway slaves – and paints a more dynamic, lusty picture of Roman family life.

Mary uncovers their preserved beds, furniture and cradles, tries on Roman wedding rings and meets some eccentric wives like Glyconis, praised by her husband for liking a drink or two, and Allia Potestas, who lived in a Roman ménage a trois. Mary explores Roman parenting, childbirth and children, including Sulpicius Maximus, an 11-year-old schoolboy who was worked to death by his pushy parents, and Geminia Mater, a five-year-old tomboy.

Finally, Mary paints a more nuanced picture of Roman slavery and asks why if it was such a brutal institution did many Romans choose to be buried with their servants – living cheek by jowl in death, as in life.

Meet the Romans with Mary Beard episode 3 – Behind Closed Doors

Slavery in ancient Rome played an important role in society and the economy. Besides manual labor, slaves performed many domestic services, and might be employed at highly skilled jobs and professions. Accountants and physicians were often slaves. Slaves of Greek origin in particular might be highly educated. Unskilled slaves, or those sentenced to slavery as punishment, worked on farms, in mines, and at mills.

Slaves were considered property under Roman law and had no legal personhood. Most slaves would never be freed. Unlike Roman citizens, they could be subjected to corporal punishment, sexual exploitation (prostitutes were often slaves), torture and summary execution. Over time, however, slaves gained increased legal protection, including the right to file complaints against their masters.

A major source of slaves had been Roman military expansion during the Republic. The use of former enemy soldiers as slaves led perhaps inevitably to a series of en masse armed rebellions, the Servile Wars, the last of which was led by Spartacus. During the Pax Romana of the early Roman Empire (1st–2nd centuries AD), emphasis was placed on maintaining stability, and the lack of new territorial conquests dried up this supply line of human trafficking. To maintain an enslaved work force, increased legal restrictions on freeing slaves were put into place. Escaped slaves would be hunted down and returned (often for a reward). There were also many cases of poor people selling their children to richer neighbors as slaves in times of hardship.

Meet the Romans with Mary Beard episode 3: Professor Mary Beard puts aside the stories of emperors and armies, guts and gore, to meet the real Romans living at the heart of it all.