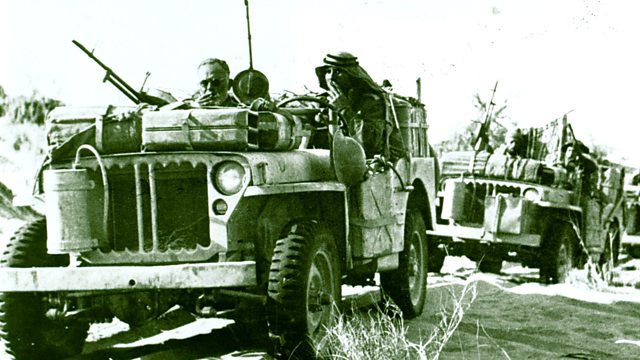 SAS – Rogue Warriors episode 2: With the tragic loss of Jock Lewes, Stirling’s second in command is now the newly promoted Captain Paddy Mayne – an officer as unpredictable and dangerous as the new phase of war that is about to begin.

Unknown to David Stirling, the Germans are training special units to track, intercept and kill the marauding SAS. The hunters soon become the hunted. The SAS has to adapt if it is going to survive. Disaster strikes when Stirling is captured by the Germans. As the SAS prepare to fight Hitler in Europe, they are without the inspirational leadership of the man who created them.

Lieutenant Colonel Sir Archibald David Stirling, DSO, OBE (15 November 1915 – 4 November 1990) was a Scottish officer in the British Army, mountaineer, and the founder of the Special Air Service. He saw active service during the Second World War.

Stirling was commissioned into the Scots Guards from Ampleforth College Contingent Officer Training Corps on 24 July 1937. In June 1940, he volunteered for the new No. 8 Commando under Lieutenant-Colonel Robert Laycock, which became part of Force Z (later named “Layforce”).

On 1 February 1941, Layforce sailed for the Middle East, in support of the capture of Rhodes, but were soon disbanded after suffering heavy casualties in the Battle of Crete and the Battle of the Litani River. Stirling remained convinced that due to the mechanised nature of war, a small team of highly trained soldiers with the advantage of surprise could attack several targets from the desert in a single night.

Believing that taking his idea up through the chain of command was unlikely to work, Stirling decided to go straight to the top. On crutches following a parachuting accident, he stealthily entered Middle East headquarters in Cairo (under, through, or over a fence) in an effort to see Commander-in-Chief General Claude Auchinleck.

During the course of the Second World War he became one of the British Army’s most highly decorated soldiers and, by destroying 47 aircraft in a single action, he may well have destroyed more German aircraft than the RAF’s highest scoring ace. He was controversially denied a Victoria Cross.

A History of Christianity episode 4 – Reformation – The Individual Before God