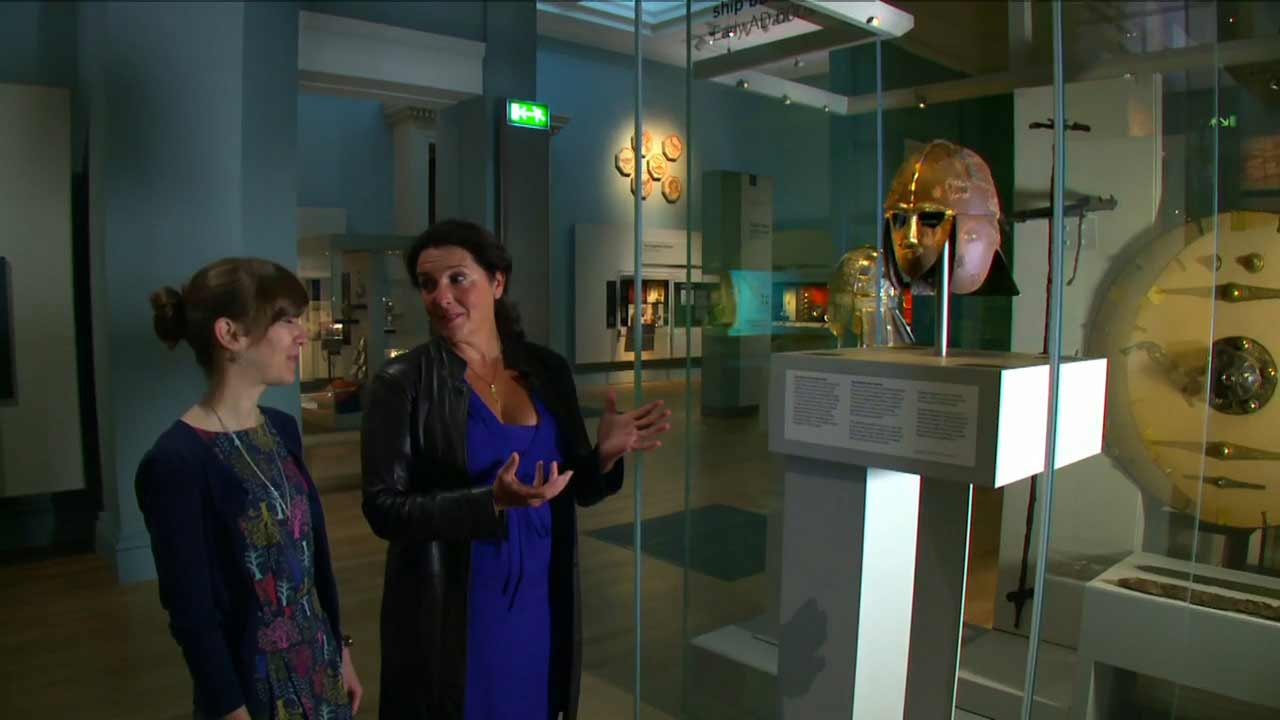 Secrets from the Sky – Sutton Hoo episode 5: Bettany and Ben visit Sutton Hoo in Suffolk to show evidence that it is Britain’s Valley of the Kings, and how it went undiscovered until it was found by Basil Brown.

Britain is full of monuments and other buildings that have historical significance, some of which are explored in an unusual way on this show. Historian Bettany Hughes and aerial archaeologist Ben Robinson explore the sites from above using camera-equipped, remote-controlled helicopters.The top-down view of the locations helps link together clues on the ground, which can have a different meaning when viewed from above, to discover the full story of the landscape. The locations that are explored via a bird’s eye view include Tintagel Castle in Cornwall, Suffolk’s Sutton Hoo cemetery and Stonehenge.

Bettany Mary Hughes is an English historian, author and broadcaster, specialising in classical history. Her published books cover classical antiquity and myth, and the history of Istanbul. She is active in efforts to encourage the teaching of the classics in UK state schools. Hughes was appointed OBE in 2019.

Sutton Hoo is the site of two early medieval cemeteries dating from the 6th to 7th centuries near Woodbridge, in Suffolk, England. Archaeologists have been excavating the area since 1938. One cemetery had an undisturbed ship burial with a wealth of Anglo-Saxon artefacts. Most of these objects are now held by the British Museum. Scholars believe Rædwald of East Anglia is the most likely person to have been buried in the ship. The site is important in establishing the history of the Anglo-Saxon kingdom of East Anglia as well as illuminating the early Anglo-Saxon period which lacked historical documentation.

The site was first excavated by Basil Brown under the auspices of the landowner Edith Pretty, but when its significance became apparent, national experts took over. During the 1960s and 1980s, the wider area was explored by archaeologists and many other individual burials were revealed. The artefacts comprise what is considered the greatest treasure ever discovered in the UK. Those found in the burial chamber include a suite of metalwork dress fittings in gold and gems, a ceremonial helmet, a shield and sword, a lyre, and silver plate from the Byzantine Empire.

The ship burial has prompted comparisons with the world of the Old English poem Beowulf. The poem is partly set in Götaland in southern Sweden, which has archaeological parallels to some of the finds from Sutton Hoo.

The cemeteries are located close to the River Deben estuary and other archaeological sites. They appear as a group of approximately 20 earthen mounds that rise slightly above the horizon of the hill-spur when viewed from the opposite bank. The newer burial ground is situated on a second hill-spur about 500 metres (1,600 ft) upstream of the first. It was discovered and partially explored in 2000 during preliminary work for the construction of an Exhibition Hall for tourists. This site also has burials, but the tops of their mounds had been obliterated by later agricultural activity.

Secrets from the Sky - Sutton Hoo episode 5: Bettany and Ben visit Sutton Hoo in Suffolk to show evidence that it is Britain's Valley of the Kings