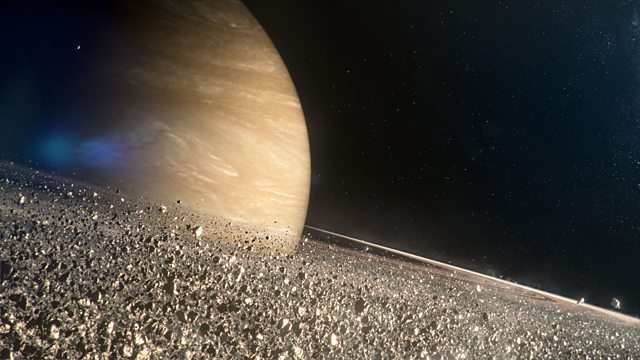 Brian Cox’s Adventures in Space and Time episode 3: Brian takes a fresh look at the concept of gravity, revealing it to be far more than just the force that makes things fall to the ground. Recent scientific breakthroughs are challenging physicists’ ideas of the very nature of reality.

He recalls some of his most iconic TV moments: being first on the scene to meet a space capsule returning three astronauts from the International Space Station; demonstrating how a bowling ball and feather fall at the same speed in the largest vacuum chamber in the world; filming in a prison wired up to explode; and standing on a majestic snowy mountain peak to explain the nature of spacetime.

Whilst revisiting his previous programmes, he takes us on a tour of gravity, explaining how Sir Isaac Newton devised a simple formula to describe gravity as a force that governs both how apples fall and how planets move in the heavens. He explores some of gravity’s stranger features, explaining how this comparatively weak force becomes the most dominant in the universe when it comes to the celestial mechanics of the cosmos: sculpting our solar system and even destroying stars.

Using the world’s largest vacuum chamber in NASA’s Space Power Facility in Cleveland, Ohio, Brian demonstrates how gravity makes objects fall at the same rate, explaining how this led Einstein to his ‘happiest thought’ and the radical rethinking of the nature of space and time. Brian also explains how our contemporary study of one of gravity’s strangest creations, black holes, is leading us to yet more revolutionary, and in his words ‘bonkers’, views of the universe we live in.

Brian Cox’s Adventures in Space and Time episode 3 – What Is Gravity?

Gravity, or gravitation, is a natural phenomenon by which all things with mass or energy—including planets, stars, galaxies, and even light—are brought toward (or gravitate toward) one another. On Earth, gravity gives weight to physical objects, and the Moon’s gravity causes the ocean tides. The gravitational attraction of the original gaseous matter present in the Universe caused it to begin coalescing and forming stars and caused the stars to group together into galaxies, so gravity is responsible for many of the large-scale structures in the Universe. Gravity has an infinite range, although its effects become weaker as objects get further away.

Gravity is most accurately described by the general theory of relativity (proposed by Albert Einstein in 1915), which describes gravity not as a force, but as a consequence of masses moving along geodesic lines in a curved spacetime caused by the uneven distribution of mass. The most extreme example of this curvature of spacetime is a black hole, from which nothing—not even light—can escape once past the black hole’s event horizon. However, for most applications, gravity is well approximated by Newton’s law of universal gravitation, which describes gravity as a force causing any two bodies to be attracted toward each other, with magnitude proportional to the product of their masses and inversely proportional to the square of the distance between them.

Title
Brian Cox's Adventures in Space and Time episode 3 - What Is Gravity?
Description

Brian Cox's Adventures in Space and Time episode 3: takes a look at the concept of gravity, the force that makes things fall to the ground.