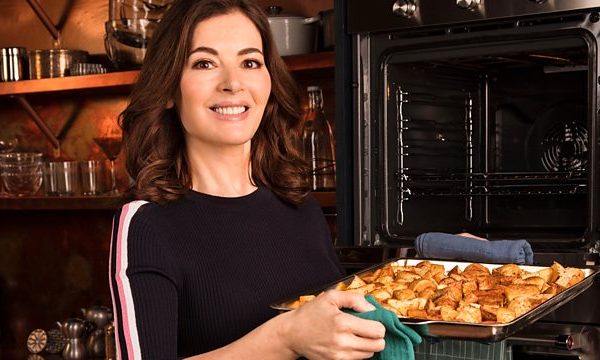 In this hour-long special, Nigella shares her foolproof guide of Christmas recipes – stress free festive cooking and easy entertaining . Inspired by the sparkling Christmas lights in Kansas City, USA, Nigella shows us how to have our most relaxed, most spectacular Christmas yet. She introduces the local, home-spun food that has inspired some of this year’s favourite festive recipes, adding a British twist back in her kitchen.

Her oh-so-slow-cooked black treacle ham replaces the traditional turkey as the party centrepiece, paired with a refreshingly bright medley of sweet and sour vegetable slaw.

Nigella treats her guests to not one, but three sumptuous cakes to tuck into. Her trio of bundt cakes begins with a delicately flavoured cider and five-spice sponge, topped with an indulgent salted caramel sauce, followed by a delicious lemon and thyme version and ending with a pumpkin bundt, adorned with an aromatic orange icing.

I never feel the need to apologize for using jars of chargrilled peppers, for while I don’t eat them just as they are, I find them the most useful ingredient. Just make sure that you are using peppers that are preserved in oil rather than brine. The potatoes don’t roast in this oil, so much as braise: they will crisp up in parts, but mostly just become softened and rich in the sweet peppery juices.

Here is an exercise in chopping meditation for you! There is much to slice, but you end up with a bright tangle of slaw that feeds a crowd and has enough zing in it to bring a table of cold cuts to life.

Most of the time I refer to this as my Cider and five-spice gingerbread, but I changed the name out of concern for those who expect a little more gingeriness from their gingerbead. If you want to intensify the ginger element, use 250ml/9fl oz ginger beer in place of the cider.

This cake is wonderful enough plain as it is, though I have something of a faiblesse for the gleaming accompaniment of the smoky salted caramel sauce, as you can see from the picture.

The star here is the buckwheat, not only because it makes these cookies gluten-free, but mainly because I feel it brings its own nutty flavour and unique texture, creating a cookie that has softness and a shortbready bite, as well as a subtle smokiness. Those who like a truly chewy cookie might find these a little cakey, but I like chewiness in a cookie and yet find constant excuses to make these.

Instead of being boiled and then transferred to a hot oven to be glazed, I cook the ham so, so slowly, in the oven, wrapped in foil, so that it steams sweetly in the low heat. I then remove the ham from the oven, take off the rind, stud the layer of fat on top with cloves and cover with a mustardy black treacle glaze, and put the joint briefly back in a very hot oven.

Cooked like this, the meat is astonishingly tender and carves into thin slices with ease; there is also very little shrinkage, and no wrangling with large joints of meat in boiling liquid.