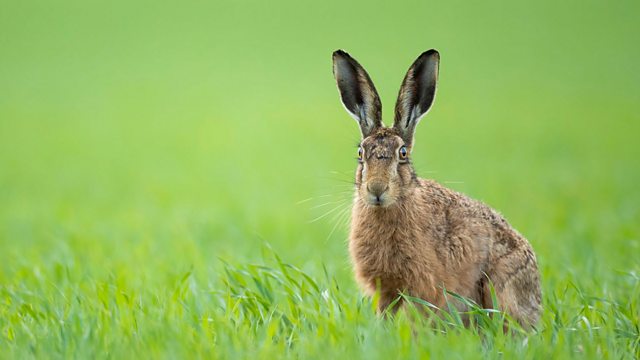 Springwatch episode 9 2021: At the start of the final week, which birds are ready to leave their nests? Chris Packham and Michaela Strachan bring live updates from Norfolk, Gillian Burke investigates some clever cuttlefish in Northern Ireland and Iolo Williams tracks down mountain hares in the Scottish Highlands. Also, there are sea slugs making a colourful appearance and a report on the spring sounds of Sherwood Forest.

The mountain hare lives in Scotland and the north of England. It lives in upland areas and is most common on heathland, where it grazes on vegetation and the bark of young trees and bushes. Mountain hares do not dig burrows, but shelter in ‘forms’, which are shallow depressions in the ground or grass; when disturbed, they can be seen bounding across the moors, using their powerful hind legs to propel them forwards, often in a zigzag pattern. Mountain hares are at their most visible in spring, when the snow has melted, but they still have their white, winter coat. Females produce one to four litters of one to three young (known as leverets) a year.

The mountain hare has a grey-brown coat in summer, with a bluish tinge, and turns white in winter – only its ear tips stay black. The Irish hare may remain brown even in winter and its coat has a reddish tinge. Mountain hares are larger than rabbits, but smaller than brown hares and have shorter ears.

Springwatch episode 9 2021: At the start of the final week, which birds are ready to leave their nests? Chris and Michaela bring live updates