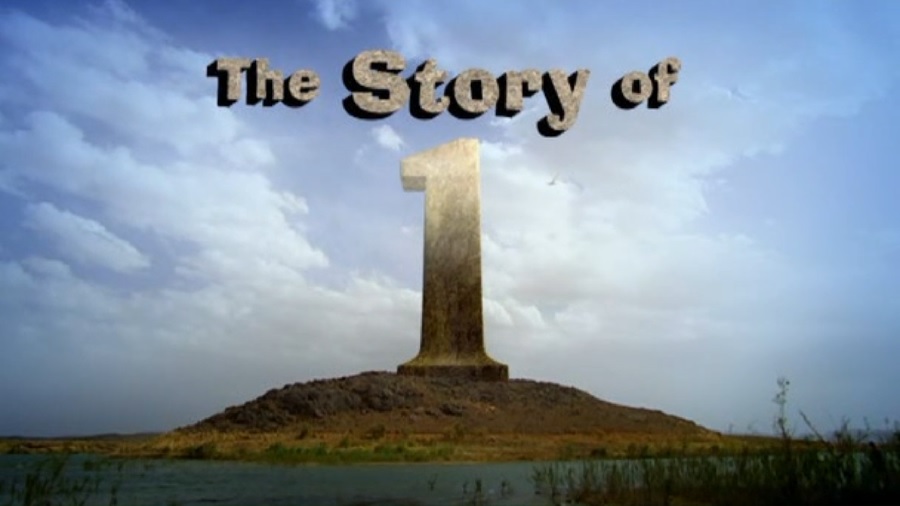 The Story of 1 is a documentary about the history of numbers, and in particular, the number 1. It was presented by former Monty Python member Terry Jones.

Terry Jones first journeys to Africa, where bones have been discovered with notches in them. However, there is no way of knowing if they were used for counting. Jones then discusses the Ishango bone, which must have been used for counting, because there are 60 scratches on each side of the bone. Jones declares this “the birth of one”; a defining moment in history of mathematics.

He then journeys to Sumer. Shortly after farming had been invented and humans were starting to build houses, they started to represent 1 with a token. With this, it was possible for the first time in history to do arithmetic. The Sumerians would enclose a certain number of tokens in a clay envelope and imprint the number of tokens on the outside. However, it was realized that one could simply write the number on a clay tablet.

To explore why the development of numbers occurred there and not some other place, Jones travels to Australia and meets a tribe called the Warlpiri. In their language, there are no words for numbers. When an individual is asked how many grandchildren he has, he simply replies he has “many”, while he in fact has four.

In Egypt, the numeral system provides a fascinating glimpse of Egyptian society, as larger numbers seem more applicable to higher strata of society. It went something like this: One was a line, ten was a rope, a hundred a coil of rope (three symbols for smaller numbers, probably applicable to the average Egyptian), a thousand a lotus (a symbol of pleasure), ten thousand was a commanding finger, and a million – a number the Sumerians would never have dreamed of – was the symbol of a prisoner begging for forgiveness.

The Egyptians had a standard unit, the cubit, which was instrumental for building wonders such as the pyramids. Jones then journeys to Greece to cover the time of Pythagoras. Jones discusses with mathematician Marcus de Sautoy Pythagoras’ obsession with numbers, his secret society, his dedication to numbers, the Pythagorean theorem, and his flawed belief that all things could be measured in units (brought down by the attempt to measure the hypotenuse of an isosceles right triangle, in units relative to the two legs).

Title
The Story of 1 - documentary on the number one
Description

The Story of 1 is a documentary about the history of numbers, and in particular, the number 1. It was presented by former Monty Python member Terry Jones.

Around the World in 80 Treasures episode 9 – Turkey to Germany

The Pacific War in Color episode 6