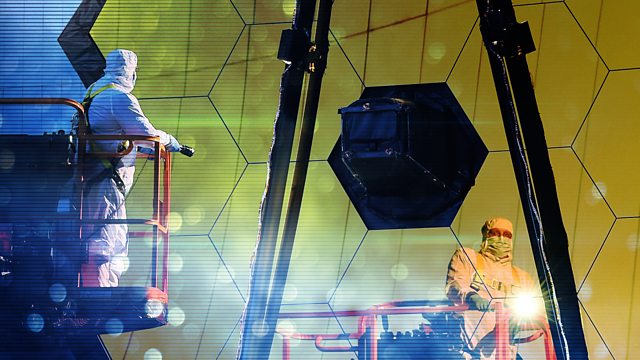 Super Telescope: Mission to the Edge of the Universe

Super Telescope: Mission to the Edge of the Universe – As Nasa releases the first images from the James Webb Space Telescope, this film tells the inside story of the telescope’s construction and the astronomers taking its first picture of distant stars and galaxies. Will it be the deepest image of our universe ever taken?

The successor to Hubble, and 100 times more powerful, the James Webb is the most technically advanced telescope ever built. It will look further back in time than Hubble to an era around 200 million years after the Big Bang, when the first stars and galaxies appeared. Webb’s primary mission is to capture the faint light from these objects on the edge of our visible universe so that scientists can learn how they formed, but its instruments are so sensitive it could also be the first telescope to detect signs of life on a distant planet.

The James Webb Telescope is an £8 billion gamble on the skills of its engineering team. It’s the first telescope designed to unfold in space – a complicated two-week operation in which 178 release devices must all work – 107 of them on the telescope’s sun shield alone. If just one fails, the expensive telescope could become a giant piece of space junk.

From its conception in the late 1980s, the construction of Webb has posed a huge technical challenge. The team must build a mirror six times larger than Hubble’s and construct a vast sun shield the size of a tennis court, fold them up so they fit into an Ariane 5 rocket, then find a way to unfold them in space. This film tells the inside story of the James Webb Space Telescope in the words of the engineers who built it and the astronomers who will use it.

Super Telescope: Mission to the Edge of the Universe

The James Webb Space Telescope (JWST) is a space telescope designed primarily to conduct infrared astronomy. As the largest optical telescope in space, its greatly improved infrared resolution and sensitivity allows it to view objects too old, distant, or faint for the Hubble Space Telescope. This is expected to enable a broad range of investigations across the fields of astronomy and cosmology, such as observation of the first stars and the formation of the first galaxies, and detailed atmospheric characterization of potentially habitable exoplanets.

The U.S. National Aeronautics and Space Administration (NASA) led JWST’s development in collaboration with European Space Agency (ESA) and the Canadian Space Agency (CSA/ASC). The NASA Goddard Space Flight Center (GSFC) in Maryland managed telescope development, the Space Telescope Science Institute in Baltimore on the Homewood Campus of Johns Hopkins University operates JWST, and the prime contractor was Northrop Grumman. The telescope is named after James E. Webb, who was the administrator of NASA from 1961 to 1968 during the Mercury, Gemini, and Apollo programs.

JWST was launched in December 2021 on an Ariane 5 rocket from Kourou, French Guiana, and arrived at the Sun–Earth L2 Lagrange point in January 2022. As of July 2022, JWST is intended to succeed the Hubble as NASA’s flagship mission in astrophysics. The first image from JWST was released to the public via a press conference on 11 July 2022.

Title
Super Telescope: Mission to the Edge of the Universe
Description

Super Telescope: Mission to the Edge of the Universe - this film tells the inside story of the telescope's construction