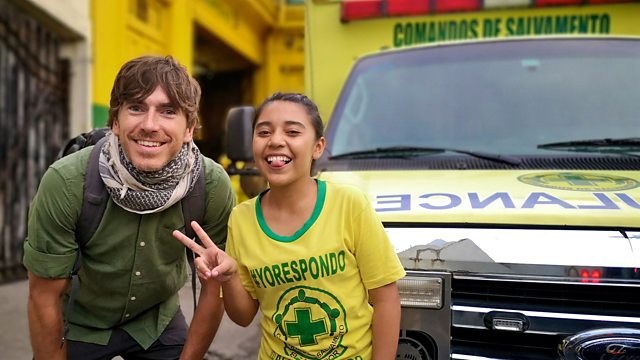 The Americas with Simon Reeve episode 5: In this fifth leg, Simon travels across Central America from the Caribbean to the Pacific. Simon Reeve continues his journey through the Americas.

He begins by diving on a coral reef on the coast of northern Belize and visits a rescue centre for orphaned manatees. In Belize’s Chiquibul National Park, Simon witnesses a gun battle between armed park rangers and intruders from neighbouring Guatemala intent on clearing the rainforest for farming.

The Americas with Simon Reeve episode 5

Simon’s next stop is Guatemala, where over half the population live off the land. The staple crop is corn, but Simon discovers that a vast area of Central America is suffering from a severe drought, partly blamed on climate change. Half of children under the age of five are malnourished, and Simon visits one mother who only has eight days of food left to feed her young family. The drought is not only causing hunger but mass migration to the United States.

In El Salvador Simon encounters the other big factor in the migration crisis: the brutal gang violence that causes thousands to flee the country. A new government in El Salvador is cracking down on the gangs, and Simon heads out on patrol with an elite police unit tasked with taking back control of the streets. In a dark situation, Simon finds a ray of light in a volunteer organisation that takes young teenagers from gang neighbourhoods and trains them to be paramedics.

The last destination on this leg of the journey is Costa Rica, a small tropical paradise that’s home to 6% of the world’s biodiversity. In a troubled region, Costa Rica is a beacon of hope and stability. It has led the world in eco-tourism and aims to become the first carbon neutral country in 2021. Simon joins school children to plant trees, one of many projects to restore the country’s tropical forests and fight climate change.

In this fifth leg, Simon travels across Central America from the Caribbean to the Pacific. Simon Reeve continues his journey through the Americas.