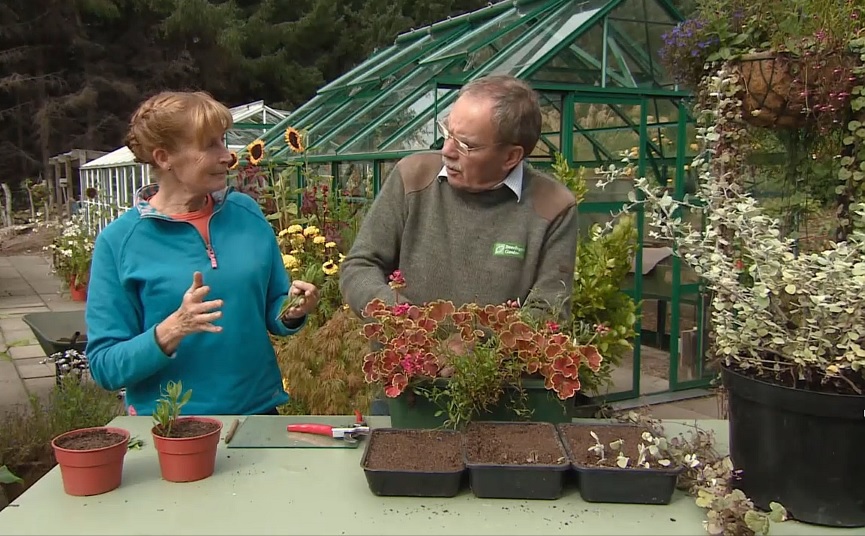 In Beechgrove Garden episode 23 2017 it is hedge-clipping time and Jim, Carole and George trim their way around the garden. Chris finishes the planting in the heather garden to help create the windswept, top-of-the-mountain look, adding a range of tough grasses and ferns. From prodigious parsnips to dinner plate-sized dahlias, Jim visits the showers and growers at the Dundee Flower and Food Festival.

Earlier this year, the Beechgrove team visited some of the entrants to the show to see how preparations were going. Jim catches up with them again at the show to see if their labours have borne fruit.

We have had a lovely display of summer bedding this year. However it was now time to decide which plants to keep, which plants can be propagated from and which ones to get rid of. Lobelia sown from seed would go on the compost heap and new plants sown next year.

Geraniums, on the other hand, can be kept and dried off indoors to keep them ticking. over winter or could be potted up as house plants. If the plant throws up any flowers,theses should be picked off.

2. Ferns and Grasses in the Heather Garden

This heather garden has been created to give a naturalist effect with plants that would occur at the top of a hillside such as heathers and ferns flowing over mounds and down into water courses Chris lifted the canopy of the Chamaecyparis by removing the lower branches to create views.

Jim and George were in the Main Vegetable Plot. They were keeping tabs on the crop harvest. George had picked Cabbage ‘Minicole’. This is a hard cabbage which will keep firm for a long time. Jim said he had seen such cabbages hung up in a shed for storage over winter. The red varieties – ‘Red Rookie’ and ‘Tinty’ – both pointed cabbages are enough for 2 people. The leeks were the best yet at Beechgrove – not a blemish or sign of rust on them. The brassicas were looking good – particularly the kale and cabbages. George was not so keen on the white kale for its taste.

In Beechgrove Garden episode 23 2017 it is hedge-clipping time and Jim, Carole and George trim their way around the garden.