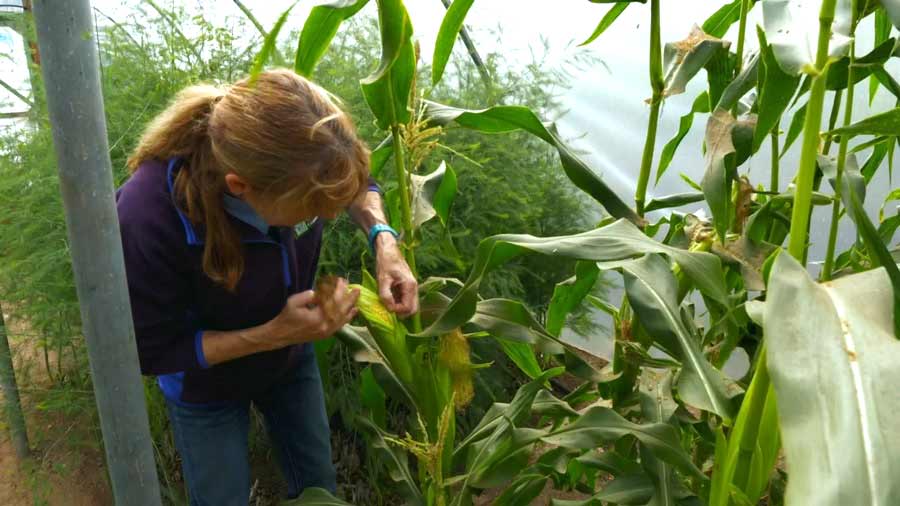 The Beechgrove Garden episode 24 2020: Something old, something new, something borrowed, something blue pretty well describes Beechgrove this week. Kirsty takes a look at one of the oldest and rarest plants known to man, the Wollemi Pine, sometimes called the fossil tree. George shows how to naturalise new bulbs in grass while Carole, after borrowing techniques from her Dad, reviews her tomatoes and sees if her Dad has it right.

Beechgrove is a hardy annual TV gardening series which sets out to deal with, glory in and celebrate Scottish horticulture and growing conditions. Beechgrove is and always has been a firmly practical, get-your-hands-dirty gardening programme which delights in success but also learns from failures in the garden and never takes itself too seriously.

Wollemia is a genus of coniferous tree in the family Araucariaceae. Wollemia was known only through fossil records until the Australian species Wollemia nobilis was discovered in 1994 in a temperate rainforest wilderness area of the Wollemi National Park in New South Wales, in a remote series of narrow, steep-sided sandstone gorges 150 km (93 mi) northwest of Sydney. The genus is named after the National Park.

In both botanical and popular literature the tree has been almost universally referred to as the Wollemi pine, although it is not a true pine (genus Pinus) nor a member of the pine family (Pinaceae), but, rather, is related to Agathis and Araucaria in the family Araucariaceae. The oldest fossil of the Wollemi tree has been dated to 200 million years ago.

The Wollemi pine is classified as critically endangered (CR) on the IUCN’s Red List, and is legally protected in Australia. After it was discovered that the trees could be successfully cloned, new trees were potted up in the Botanic Gardens of Sydney and Mount Annan. A Recovery Plan has been drawn up, outlining strategies for the management of this fragile population; the overall objective is to ensure that this species remains viable in the long term. Wollemi pines have also been presented by Australian prime ministers and foreign affairs ministers to various dignitaries around the world.

How to grow tomatoes in Beechgrove Garden episode 24 2020

Growing your own tomatoes is simple and just a couple of plants will reward you with plenty of delicious tomatoes in the summer. There are all sizes of tomatoes to try, from the tiniest cherry types, favourites with children, through to full-flavoured giant beefsteak tomatoes.

Tomatoes generally come in two different growth habits: cordon (or indeterminate) tomatoes grow tall, reaching up to 1.8m (6ft) and require support; bush (or determinate) tomatoes are bushy and don’t require staking. Tomatoes are easy to grow from seed. You can sow seed from late March to early April if you will be growing the plants outdoors. If you are planning on growing your tomatoes in a greenhouse, you can start sowing seed earlier, from late February to mid-March.

Sow in small pots indoors, using a propagator or place the pots in a plastic bag and keep on the windowsill. The young seedlings need to be kept at around 18°C (64°F). Transplant into 9cm (3½in) pots when two true leaves have formed.

Young plants are available from garden centres in spring if you don’t have the space to raise tomato seedlings. But they will still require frost-free conditions and hardening off before planting outside.