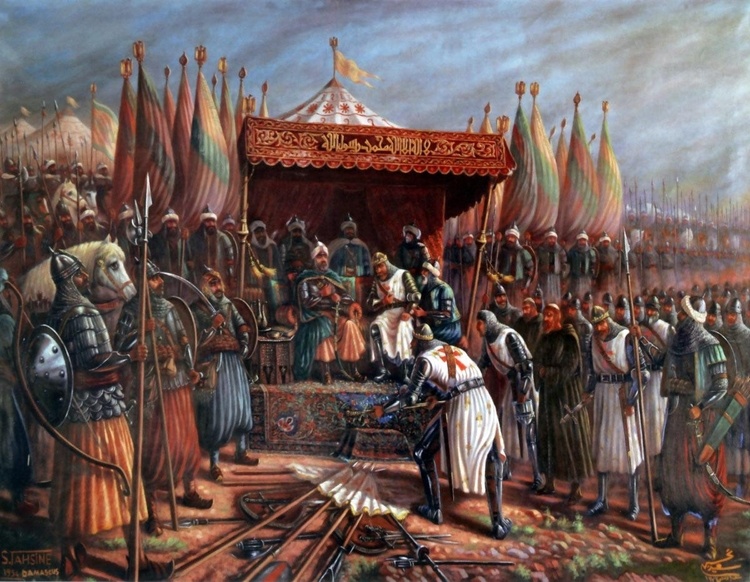 The Crusades - Clash of the Titans episode 2

In The Crusades – Clash of the Titans episode 2, Dr Thomas Asbridge offers a piercing examination of the Third Crusade and the two renowned figures who have come to embody Crusader war: Richard the Lionheart, king of England, and the mighty Muslim sultan Saladin, unifier of Islam. Drawing on fascinating eyewitness accounts and contemporary records, Dr Asbridge constructs an insightful and nuanced picture of these men and their fiercely fought struggle for the Holy Land.

Almost perfectly matched as adversaries, these two titans of holy war clashed during a year-long campaign that raged across Palestine. Both were willing to commit appalling atrocities in pursuit of victory. Each brought the full force of his military genius, guile and cunning to bear, all in pursuit of the ultimate prize: Jerusalem. Dr Asbridge reveals how this shattering conflict brought Saladin and Richard to their knees, even as it served to forge their legends.

An-Nasir Salah ad-Din Yusuf ibn Ayyub known as Salah ad-Din or Saladin, was the first sultan of Egypt and Syria and the founder of the Ayyubid dynasty. A Sunni Muslim of Kurdish ethnicity, Saladin led the Muslim military campaign against the Crusader states in the Levant. At the height of his power, his sultanate included Egypt, Syria, Upper Mesopotamia, the Hejaz, Yemen and other parts of North Africa.

He was originally sent to Fatimid Egypt in 1164 alongside his uncle Shirkuh, a general of the Zengid army, on the orders of their lord Nur ad-Din to help restore Shawar as vizier of the teenage Fatimid caliph al-Adid. A power struggle ensued between Shirkuh and Shawar after the latter was reinstated. Saladin, meanwhile, climbed the ranks of the Fatimid government by virtue of his military successes against Crusader assaults against its territory and his personal closeness to al-Adid.

After Shawar was assassinated and Shirkuh died in 1169, al-Adid appointed Saladin vizier, a rare nomination of a Sunni Muslim to such an important position in the Isma’ili Shia caliphate. During his tenure as vizier, Saladin began to undermine the Fatimid establishment and, following al-Adid’s death in 1171, he abolished the Fatimid Caliphate and realigned the country’s allegiance with the Sunni, Baghdad-based Abbasid Caliphate.

Richard I was King of England from 1189 until his death. He also ruled as Duke of Normandy, Aquitaine and Gascony, Lord of Cyprus, Count of Poitiers, Anjou, Maine, and Nantes, and was overlord of Brittany at various times during the same period. Richard the Lionheart was the third of five sons of King Henry II of England and Duchess Eleanor of Aquitaine. He was known as Richard Cœur de Lion or Richard the Lionheart because of his reputation as a great military leader and warrior. He was also known in Occitan as: Oc e No (English: Yes and No), because of his reputation for terseness.

By the age of 16, Richard had taken command of his own army, putting down rebellions in Poitou against his father. Richard was a central Christian commander during the Third Crusade, leading the campaign after the departure of Philip II of France and achieving considerable victories against his Muslim counterpart, Saladin, although he did not retake Jerusalem from Saladin.

Title
The Crusades - Clash of the Titans episode 2
Description

In The Crusades - Clash of the Titans episode 2, Dr Thomas Asbridge offers a piercing examination of the Third Crusade and the two renowned figures