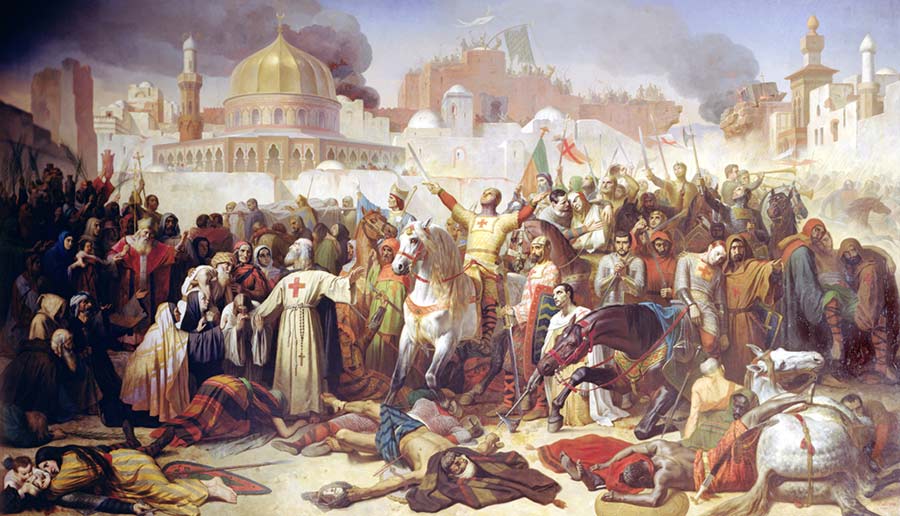 The Crusades – Holy War episode 1 : Dr Thomas Asbridge presents a revelatory account of the Crusades, the 200-year war between Christians and Muslims for control of the Holy Land.

The story of the Crusades is remembered as a tale of religious fanaticism and unspeakable violence, but now fresh research, eyewitness testimony and contemporary evidence from both the Christian and Islamic worlds shed new light on how these two great religions waged war in the name of God.

Episode one traces the epic journey of the first crusaders as they marched 3,000 miles from Europe to recapture the city of Jerusalem from Islam, enduring starvation, disease and bloodthirsty battle to reach their sacred goal, and then unleashed an appalling tide of barbaric violence upon their Muslim enemies. Yet far from being the invincible holy warriors of legend, Dr Asbridge reveals that these crusaders actually considered surrender in the midst of their titanic expedition.

The crusades were a series of religious wars sanctioned by the Latin Church in the medieval period. The best known crusades are the campaigns in the eastern Mediterranean aimed at recovering the Holy Land from Muslim rule. The term crusade is now also applied to other church-sanctioned and even non-religious campaigns. These were fought for a variety of reasons including the suppression of paganism and heresy, the resolution of conflict among rival Roman Catholic groups, or for political and territorial advantage. At the time of the early crusades, the word did not exist and it only became the leading descriptive term in English around the year 1760.

Pope Urban II preached for the First Crusade in 1095, at the Council of Clermont. He encouraged military support for Emperor Alexios I who needed reinforcements for the Byzantine Empire’s conflict with westward migrating Turks colonising Anatolia. Urban aimed to guarantee pilgrim access to the eastern Mediterranean holy sites under Muslim control. Urban’s strategy may have been to establish himself as head of the unified Church, uniting the eastern and western branches that had been divided by the East–West Schism.

The crusade established four crusader states in the eastern Mediterranean: the County of Edessa, the Principality of Antioch, the Kingdom of Jerusalem and the County of Tripoli. The enthusiastic response to Urban’s preaching across all social strata in western Europe established a precedent for further crusades. Volunteers became crusaders by taking a public vow and receiving plenary indulgences from the Church. Some were hoping for a mass ascension into heaven at Jerusalem or God’s forgiveness for their sins. Others participated to satisfy feudal obligations, obtain glory and honour, or to seek economic and political gain.

The Crusades - Holy War episode 1 : Dr Thomas Asbridge presents a revelatory account of the Crusades, the 200-year war between Christians and Muslims.