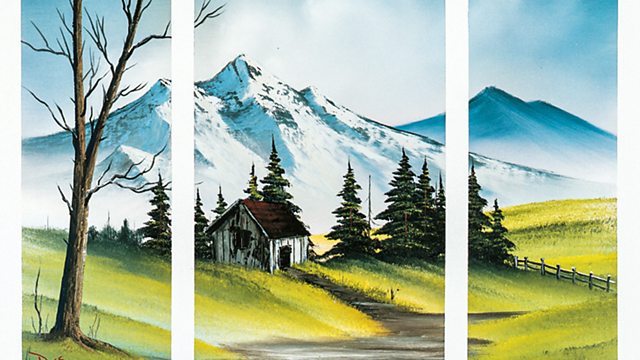 The Joy of Painting episode 8 – Triple View: In this programme, Bob Ross shows his viewers how to prepare their canvasses, guiding them step by step, as he paints a mountain view through a window, complete with cosy cabin and meadow.

In this series, Ross demonstrates his unique painting technique, which eliminates the need for each layer of paint to dry. In real time, he creates tranquil scenes taken from nature, including his trademark ‘happy’ clouds, cascading waterfalls, snow-covered forests, serene lakes and distant mountain summits. Many of Bob’s faithful viewers are not painters at all. They are relaxing and unwinding with Bob’s gentle manner and encouraging words, captivated by the magic taking place on the canvas.

The Joy of Painting episode 8 - Triple View: In this programme, Bob Ross shows his viewers how to prepare their canvasses, guiding them step by step