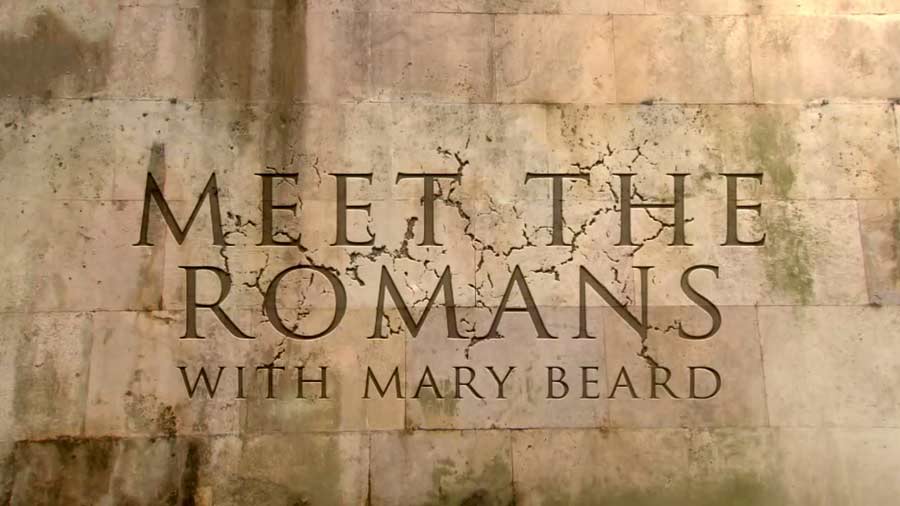 Meet the Romans with Mary Beard episode 1 – All Roads Lead to Rome: Historical series looking at the Roman empire from the bottom up. Professor Mary Beard traces the story of several ordinary yet remarkable Roman citizens.

We still live in the shadow of ancient Rome – a city at the heart of a vast empire that stretched from Scotland to Afghanistan, dominating the West for over 700 years. Professor Mary Beard puts aside the stories of emperors and armies, guts and gore, to meet the real Romans living at the heart of it all. In this programme, Mary asks not what the Romans did for us, but what the empire did for Rome.

She rides the Via Appia, climbs up to the top seats of the Colosseum, takes a boat to Rome’s port Ostia and takes us into the bowels of Monte Testaccio. She also meets some extraordinary Romans: Eurysaces, an eccentric baker, who made a fortune out of the grain trade and built his tomb in the shape of a giant bread oven; Baricha, Zabda and Achiba, three prisoners of war who became Roman citizens; and Pupius Amicus, the purple dye seller making imperial dye from shellfish imported from Tunisia. This is Rome from the bottom up.

The Appian Way (Latin and Italian: Via Appia) is one of the earliest and strategically most important Roman roads of the ancient republic. It connected Rome to Brindisi, in southeast Italy. The road is named after Appius Claudius Caecus, the Roman censor who began and completed the first section as a military road to the south in 312 BC during the Samnite Wars.

The main part of the Appian Way was started and finished in 312 BC.

The road began as a leveled dirt road upon which small stones and mortar were laid. Gravel was laid upon this, which was finally topped with tight fitting, interlocking stones to provide a flat surface. The historian Procopius said that the stones fit together so securely and closely that they appeared to have grown together rather than to have been fitted together. The road was cambered in the middle (for water runoff) and had ditches on either side of the road which were protected by retaining walls.

Tomb of Eurysaces the Baker

The tomb of Marcus Vergilius Eurysaces the baker is one of the largest and best-preserved freedman funerary monuments in Rome. Its sculpted frieze is a classic example of the “plebeian style” in Roman sculpture. Eurysaces built the tomb for himself and perhaps also his wife Atistia around the end of the Republic (ca. 50-20 BC).

Located in a prominent position just outside today’s Porta Maggiore, the tomb was transformed by its incorporation into the Aurelian Wall; a tower subsequently erected by Honorius covered the tomb, the remains of which were exposed upon its removal by Gregory XVI in 1838. What is particularly significant about this extravagant tomb is that it was built by a freedman, a former slave.

Three sides of the slightly trapezoidal structure remain largely intact. All have the same form, with over a plain lower storey, now mostly below ground level but exposed, a storey consisting of pairs of engaged columns between flat slabs, all crammed together with no space in between.

The effect is far from the classical orders; at the corners the slabs turn to pilasters rising at the top level to unorthodox capitals combining scrolls at the sides with plant forms in the centre. There are unusual circular openings in the topmost storey, now thought to represent kneading-basins or grain-measuring vessels. Below a cornice is the frieze, with continuous scenes in relief showing the operation of the bakery where Eurystaces made what was evidently a considerable fortune. Reconstructions imagine a gently rising roof above this, now lost.

Meet the Romans with Mary Beard episode 1 - All Roads Lead to Rome: Historical series looking at the Roman empire from the bottom up.