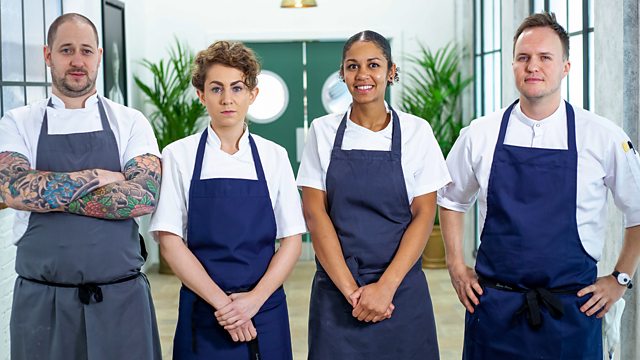 Great British Menu episode 22 2020 – North East – Starter & Fish Courses: The battle is on with the last of the heats, featuring chefs from the north east of England. Determined returner Samira Effa from Huddersfield is having another crack of the whip after being runner-up in the regional final in 2019.

Samira cooks big and bold flavours with a nod to her Iranian-Nigerian heritage and has worked in many Michelin-starred restaurants, including Bohemia in Jersey and 21212 in Edinburgh. She is currently senior production chef at Truefoods. Sheffield-born Josh Angus earned his stripes under Raymond Blanc at Le Manoir Aux Quat’Saisons before moving to London to work under Ollie Dabbous at Hide Ground, where he is now head chef. Josh hopes the theatricality of his dishes will see him all the way to the banquet. Ruth Hansom from Durham was the first woman to win Young Chef of the Year in 2017 and left the north east aged 15 to train in London.

She was working at The Ritz when it won its first Michelin star in its 110-year history before moving, via Luton Hoo hotel, to be head chef at Pamona in Notting Hill. Although classically French trained, her style is modern British and draws heavily on the past. Ruth is hoping to get to the banquet and become a role model to young, aspiring, female British chefs. Lastly, Alex Bond from York is head chef at Alchemilla in Nottingham. Proud Yorkshire man Alex believes in using as much local produce as possible and thinks that the north east has the best larder in the country.

Alex has been a chef for over 20 years and has worked at many prestigious restaurants, including 42 The Calls, Anthony’s, Restaurant Sat Bains and The Wild Rabbit. He is hoping that his dishes, with an emphasis on making vegetables the stars of the show, will win the judges over.

Presenter Susan Calman welcomes the chefs to the competition. Today, one of the four talented chefs is going home so they have to impress their surprise veteran from the outset. First, they must conjure up a new course: an amuse bouche. Between them, the four chefs rustle up a bread and dripping morsel, a cauliflower cheese, a crab, girolle and brown butter sabayon and deep-fried langoustines with garlic mayo, and bring the dishes to the pass as new veteran to the competition, Tom Brown, arrives to give judgement. Although not officially scored, this mini-course is ranked and used in the event of a tie-break.

This week, the chefs are specifically tasked with honouring the theme of realism in children’s literature, as well as heralding books and authors from their region. Samira is making a Secret Garden-inspired starter of potatoes, alliums, egg and caviar. Ruth makes her first Railway Children-inspired dish, comprising traditional north east delicacies – stotties and pease pudding. Meanwhile, Josh’s black and white pasta starter is an ode to Malorie Blackman’s Noughts and Crosses, and Alex’s veggie starter is inspired by Herb the Vegetarian Dragon.

The fish course sees the bar raised even higher. The four chefs create imaginative dishes inspired by The Railway Children, Flat Stanley, Ted Hughes and The Kingdom by the Sea, featuring sardines, langoustines, brill, crab and turbot, but which will wow renowned fish chef Tom?

With some quality dishes that receive good scores, who will be tipped out of the competition early and not get to cook their entire menu? The pressure is on for the chefs to deliver from the get-go.

Great British Menu episode 22 2020 - North East - Starter & Fish Courses: The battle is on with the last of the heats, featuring chefs from the north east of England.