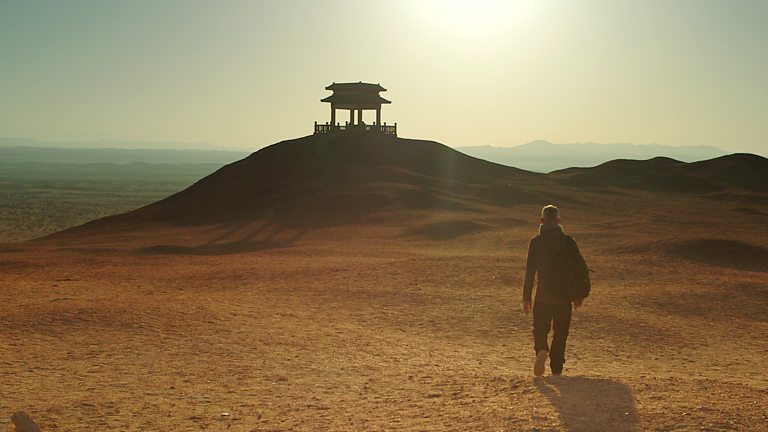 The Silk Road episode 1 : Dr Sam Willis reveals how the Silk Road was the world’s first global superhighway where people with new ideas, new cultures and new religions made exchanges that shaped humanity.

In the first episode of his series tracing the story of the most famous trade route in history, Dr Sam Willis starts in Venice and explores how its Renaissance architecture and art has been shaped by the east and by thousands of exchanges along the route.

From Venice Sam travels to China’s ancient capital, Xian. Here, Sam’s story takes him back in time to reveal the tale of an emperor who was so desperate for horses to help protect his borders that he struck one of the most significant trade deals in human history – he wanted war horses, he gave the most precious material in the world, silk. From this single deal, a network of trading paths were carved out across thousands of miles by merchants, traders, envoys, pilgrims and travellers. It is known to us today as the Silk Road.

The Silk Road was a network of trade routes which connected the East and West, and was central to the economic, cultural, political, and religious interactions between these regions from the 2nd century BCE to the 18th century.

The Road derives its name from the lucrative trade in silk carried out along its length, beginning in the Han dynasty in China (207 BCE–220 CE). The Han dynasty expanded the Central Asian section of the trade routes around 114 BCE through the missions and explorations of the Chinese imperial envoy Zhang Qian, as well as several military conquests. The Chinese took great interest in the security of their trade products, and extended the Great Wall of China to ensure the protection of the trade route.

The Silk Road trade played a significant role in the development of the civilizations of China, Korea, Japan, the Indian subcontinent, Iran, Europe, the Horn of Africa and Arabia, opening long-distance political and economic relations between the civilizations. Though silk was the major trade item exported from China, many other goods and ideas were exchanged, including religions (especially Buddhism), syncretic philosophies, sciences, and technologies like paper and gunpowder. So in addition to economic trade, the Silk Road was a route for cultural trade among the civilizations along its network. Diseases, most notably plague, also spread along the road.

Dr Willis reveals how the Silk Road was the world's first global superhighway where people with new ideas and new cultures made exchanges that shaped us.

A History of Scotland episode 2 – Hammers of the Scots