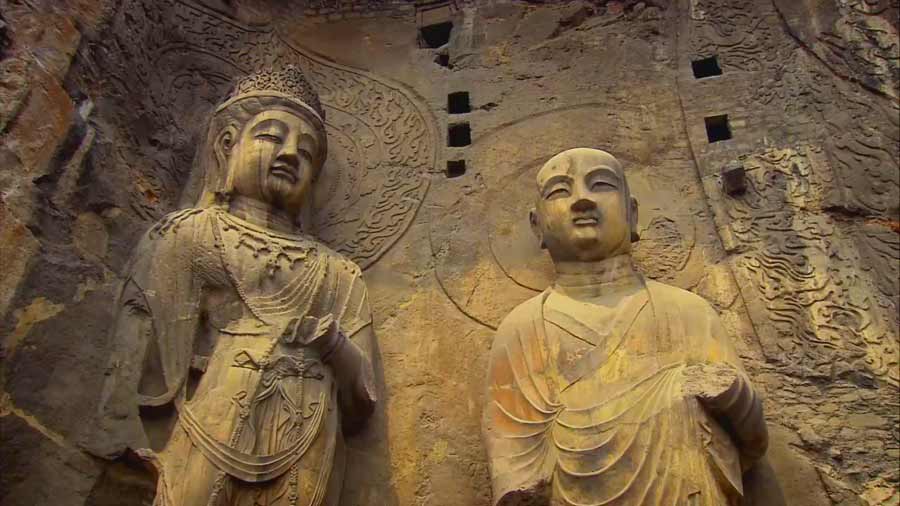 The Story of China episode 2 - Silk Roads and China Ships

The Story of China episode 2 – Silk Roads and China Ships: Michael Wood tells the tale of China’s first great international age under the Tang Dynasty (618-907). From the picturesque old city of Luoyang, he travels along the Silk Road to the bazaars of central Asia and into India on the track of the Chinese monk who brought Buddhism back to China. This tale is still loved by the Chinese today and is brought to life by storytellers, films and shadow puppet plays.

Then in the backstreets and markets of Xi’an, Michael meets descendants of the traders from central Asia and Persia who came into China on the Silk Road. He talks to Chinese Muslims in the Great Mosque and across town hears the amazing story of the first reception of Christianity in 635.

Moving south, Michael sees the beginnings of China as an economic giant. On the Grand Canal, a lock built in 605 still handles 800 barges every day! The film tracks the rise of the silk industry and the world’s favourite drink – tea. Michael looks too at the spread of Chinese script, language and culture across east Asia. ‘China’s influence on the East was as profound as Rome on the Latin West’, he says, ‘and still is today’.

Finally, the film tells the intense drama of the fall of the Tang. Among the eyewitnesses were China’s greatest poets. In a secondary school in a dusty village, where the Chinese Shakespeare – Du Fu – is buried in the grounds, the pupils take Michael through one famous poem about loss and longing as the dynasty falls. And in that ordinary classroom, there is a sense of the amazing drama and the deep-rooted continuities of Chinese culture.

The Tang dynasty or the Tang Empire was an imperial dynasty of China that ruled from 618 to 907, with an interregnum between 690 and 705. It was preceded by the Sui dynasty and followed by the Five Dynasties and Ten Kingdoms period in Chinese history. Historians generally regard the Tang as a high point in Chinese civilization, and a golden age of cosmopolitan culture. Tang territory, acquired through the military campaigns of its early rulers, rivaled that of the Han dynasty. The Tang capital at Chang’an (present-day Xi’an) was the most populous city in the world in its day.

The Lǐ family founded the dynasty, seizing power during the decline and collapse of the Sui Empire. The dynasty was briefly interrupted when Empress Wu Zetian seized the throne, proclaiming the Wu Zhou dynasty and becoming the only legitimate Chinese empress regnant. In two censuses of the 7th and 8th centuries, the Tang records estimated the population by number of registered households at about 50 million people. Yet, even when the central government was breaking down and unable to compile an accurate census of the population in the 9th century, it is estimated that the population had grown by then to about 80 million people.

With its large population base, the dynasty was able to raise professional and conscripted armies of hundreds of thousands of troops to contend with nomadic powers in dominating Inner Asia and the lucrative trade-routes along the Silk Road. Various kingdoms and states paid tribute to the Tang court, while the Tang also conquered or subdued several regions which it indirectly controlled through a protectorate system. Besides political hegemony, the Tang also exerted a powerful cultural influence over neighboring East Asian states such as those in Japan and Korea.