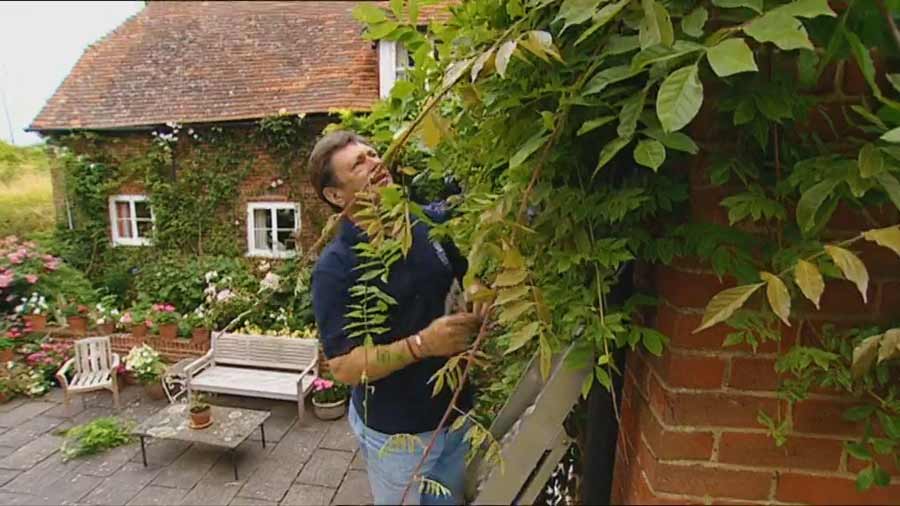 The A to Z of TV Gardening - Letter W

The A to Z of TV Gardening – Letter W: Carol Kirkwood takes an alphabetical journey through the world of gardening, getting inspiration and advice from some of the BBC’s most popular garden presenters and programmes.

In this episode, she is exploring subjects that all begin with the letter W: Weeds, Worms, Wisteria

The A to Z of TV Gardening – Letter W

Wisteria is a genus of flowering plants in the legume family, Fabaceae (Leguminosae), that includes ten species of woody climbing bines that are native to China, Korea, Japan, and the Eastern United States. Some species are popular ornamental plants. An aquatic flowering plant with the common name wisteria or ‘water wisteria’ is in fact Hygrophila difformis, in the family Acanthaceae.

The botanist Thomas Nuttall said he named the genus Wisteria in memory of Dr Caspar Wistar (1761–1818). Questioned about the spelling later, Nuttall said it was for “euphony,” but his biographer speculated that it may have something to do with Nuttall’s friend Charles Jones Wister, Sr., of Grumblethorpe, the grandson of the merchant John Wister.

Some Philadelphia sources state that the plant is named after Wister. As the spelling is apparently deliberate, there is no justification for changing the genus name under the International Code of Botanical Nomenclature. However, some spell the plant’s common name “wistaria”.

Genetic analysis shows Callerya, Afgekia and Wisteria to be each other’s closest relatives and quite distinct from other members of the tribe Millettieae. Both have eight chromosomes.

A weed is a plant considered undesirable in a particular situation, “a plant in the wrong place”. Examples commonly are plants unwanted in human-controlled settings, such as farm fields, gardens, lawns, and parks. Taxonomically, the term “weed” has no botanical significance, because a plant that is a weed in one context is not a weed when growing in a situation where it is in fact wanted, and where one species of plant is a valuable crop plant, another species in the same genus might be a serious weed, such as a wild bramble growing among cultivated loganberries.

In the same way, volunteer crops (plants) are regarded as weeds in a subsequent crop. Many plants that people widely regard as weeds also are intentionally grown in gardens and other cultivated settings, in which case they are sometimes called beneficial weeds. The term weed also is applied to any plant that grows or reproduces aggressively, or is invasive outside its native habitat. More broadly “weed” occasionally is applied pejoratively to species outside the plant kingdom, species that can survive in diverse environments and reproduce quickly; in this sense it has even been applied to humans.

Title
The A to Z of TV Gardening - Letter W
Description

The A to Z of TV Gardening - Letter W: Carol Kirkwood takes an alphabetical journey through the world of gardening