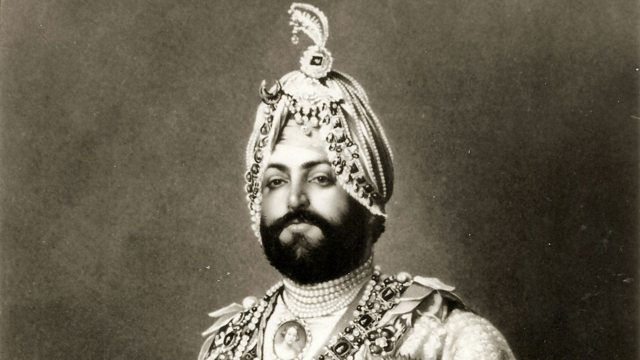 The Stolen Maharajah – Britain’s Indian Royal: The story of Duleep Singh, who was taken by the British as a boy and befriended Queen Victoria, until he realised what had been done to him and turned against the British Empire.

Documentary about the last Maharajah of the Punjab, Duleep Singh, who was wrenched from his mother’s arms as a child in the 1840s and put into the care of an official of the British Empire. Growing up in a colonial enclave in India, the boy king abandoned his Sikh religion and signed away his ancient kingdom to the British – decisions he would come to bitterly regret. He moved as a teenager to Britain, where Queen Victoria became his godmother. The Maharajah Duleep Singh lived most of his adult life here as a supremely wealthy English country gentleman, part of the British social elite. But, in time, his relationship with Britain turned sour.

This documentary retraces the journeys of Duleep Singh and his family: from the royal palaces of the Punjab to royal palaces in Britain, to his own English country estate, Elveden in Suffolk, to bohemian Paris. The programme uses recently rediscovered letters by Singh, letters and diaries written by those whose knew him, extraordinary photographs and surviving artefacts. We interview historians to get at the motives and inner life of the Maharajah Duleep Singh as he set out to recover his Sikh heritage and turn his back on his colonial past. This is a story from the age of Empire about someone whose life was defined by those historic forces.

Sir Duleep Singh (4 September 1838 – 22 October 1893), also known as His Highness Maharaja Sir Duleep Singh, G.C.S.I., or Sir Dalip Singh and later in life nicknamed the “Black Prince of Perthshire”, was the last Maharaja of the Sikh Empire. He was Maharaja Ranjit Singh’s youngest son, the only child of Maharani Jind Kaur.

Duleep Singh was placed in power in September 1843, at the age of five, with his mother ruling on his behalf, and after their defeat in the Sikh Anglo War, under a British Resident. He was subsequently kidnapped by the British Crown, and thereafter exiled to Britain at age 15 where he was befriended by Queen Victoria, who is reported to have written of the Punjabi Maharaja: “Those eyes and those teeth are too beautiful”. The Queen was godmother to several of his children. He died young, living most of his final years in the United Kingdom.

The Stolen Maharajah - Britain's Indian Royal: The story of Duleep Singh, who was taken by the British as a boy and befriended Queen Victoria